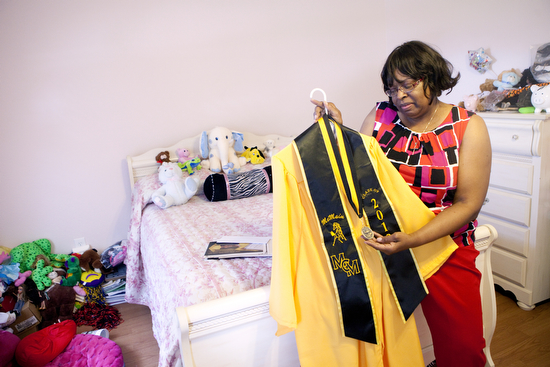 Marguerite LaJoy Washington came to her adoptive mother Margaret Washington at 3 months old, and from the beginning she was the family’s princess.

“She was my shadow,” said Washington, a former nursing instructor. “She grew up in my church, in my sorority, at Charity school of nursing, with my nursing alumni group. Wherever I was, she was there. It allowed her to be exposed to positive things, positive values and allowed her to get maturity much earlier then the average child.” 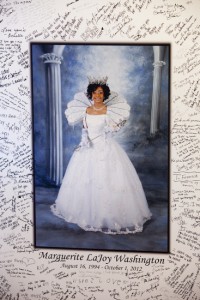 A photograph of LaJoy as the reigning Queen of The New Orleans Chapter of Delta Sigma Theta Sorority, was signed by hundreds at her funeral. (Sabree Hill, UptownMessenger.com)

LaJoy, as she was affectionately known, started ballet at the age of 5, was devoted to Girl Scouts and later became a Junior Saintsation for the New Orleans Saints. She graduated from Eleanor McMain Secondary School in 2012, where she had the second-highest physics average and was known as “Bubbles” for her upbeat attitude. LaJoy was the reigning Queen of The New Orleans Chapter of Delta Sigma Theta Sorority.

Eager to start college and study pediatrics, LaJoy began taking summer classes at Dillard University right after graduating. In the fall, she moved into the dorms, but still called her mom daily to bring her different clothes and belongings from the house.

On Sunday, Sept. 30, 2012, LaJoy had ordered Chinese food with her roommate. She had only taken a bite when she got a phone call and said she would be right back. LaJoy never returned to the dorm.

The next morning, when a police officer and chaplain arrived on Washington’s doorstep, she immediately feared that something had happened to her older son. When the authorities asked if she had a daughter, she stood in disbelief then started to sob. The natural order of things had been swept away.

LaJoy had gone over to her new boyfriend’s house, and they were in the room together — watching TV and eating Taco Bell, Washington said — when they heard a knock on the window. The boyfriend went to the window, and gunfire broke out.

The boy survived. LaJoy did not.

“Why my child? You should have gotten the one you were aiming for, and my child was lost in the process. I know that it’s not right, but it’s how I feel,” Washington said. “My Christian values say we shouldn’t question death, but my human part says, ‘Why not?’”

Compounding the pain for a mother who had always been so close to her daughter, Washington had never even heard of this new boyfriend.

“I had taught her to not be in people’s rooms like that and to come home at a good time,” Washington said. “But she was experiencing a newfound freedom as a freshman and she was making decisions for herself, and I think she knew I wouldn’t be pleased with the company she knew.”

Washington describes LaJoy’s funeral at First Grace United Methodist Church as a homecoming at the church home where she had ushered and taught Sunday School to young children. More than 900 people — half of them black, half white — attended her funeral, spilling out on to the streets.

Washington’s sorority sister, Chanda Burks, had recently lost her son Jared and told Washington about the mother’s group. She attended her first meeting in October 2012, less then two weeks after LaJoy’s death.

“I sat there crying pretty much through the whole thing. I just felt a calming spirit. These are people that understand where I am and what I am going through,” Washington said. “My ability to continue is just strengthened each time I go and I want to be there to help another mother because I know the process. It has just been so rewarding and comforting.”

Two men are in jail awaiting trial for her daughter’s murder. The trial was delayed in mid-October, but more than 100 members of her church were planning to attend. For Washington, a trial and conviction would represent an opportunity for closure.

“Too many cases are just allowed to fester and fester, year in and year out, and that is not good for the family,” Washington. “I don’t want to see anybody die, but a life has been indiscriminately taken, so they need to serve some time.”

Washington’s only regret, she said, is that she and her daughter didn’t get to spend more time together, and she keeps up with LaJoy’s friends’ progress in school, trying to encourage them as she would have her own daughter. Meanwhile, she copes with losing her Princess by trying to move forward.

“We are just losing a generation of young adults to violence and the community at large doesn’t seem to be doing much to rectify it,” said Washington. “Our grassroots group of mothers who have experienced loss will bring a greater awareness, and community leaders will become more active in attacking the problem.” 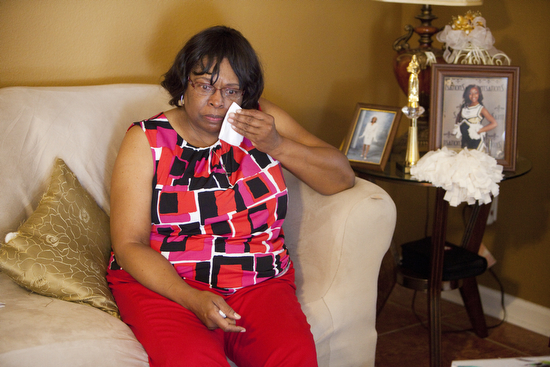 Margaret Washington wipes a tear from her eye as she speaks about the death of her daughter LaJoy. “I need some closure with a conviction. Closure doesn’t mean the end,” said Washington.
(Sabree Hill, UptownMessenger.com) 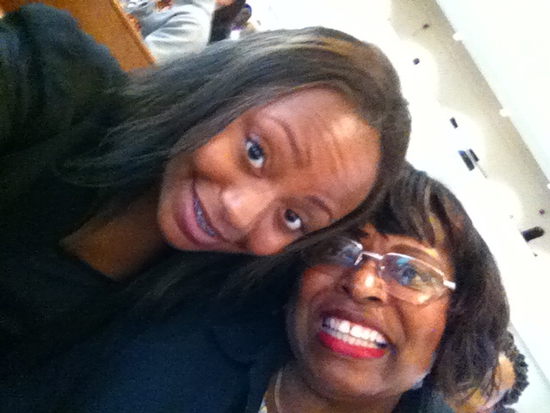 LaJoy and her mother Margaret Washington. 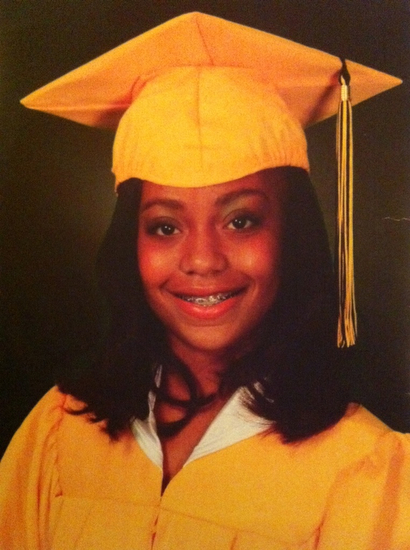 One thought on “Bearing the Unbearable: Margaret Washington”