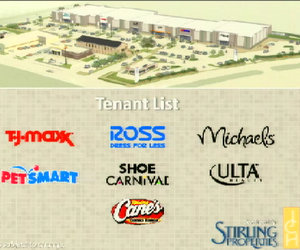 A rendering and tenant list of the Magnolia Marketplace shopping complex planned for South Claiborne Avenue. (via City of New Orleans)

Neighbors of the proposed Magnolia Marketplace retail development got their first chance Thursday evening to publicly air their questions about the project and the tax increase that supports it, as city officials prepare for a public hearing next week that will likely lead to the tax being officially levied.

Magnolia Marketplace will bring six national retailers and a fast-food restaurant — TJ Maxx, Ross, Michael’s, PetSmart, Shoe Carnival, Ulta cosmetics and Raising Cane’s — to a site at South Claiborne and Toledano next to the Harmony housing development. Construction is expected to begin in January 2014 and conclude in March 2015.

The $25 million development cost is mostly being borne by the developers (JCH Development and Stirling Properties) and through financing based on federal New Market Tax Credits, but $2.3 million will be raised through city-issued bonds based on increasing the sales tax at shops in the project by an additional 1 percent. That money will help defray what city officials identify as the “extraordinary” $4.3 million cost of replacing and relocating the water and sewer lines that served the former housing projects, they said at Thursday’s meeting with the CLIMANA neighborhood group at Greater Morning Star Baptist Church on Louisiana Avenue.

The 1-percent tax is expected to pay off the $2.3 million bond in roughly 15 years, said Tara Hernandez of JCH Development. If sales exceed the current $30 million-per-year expectations, the sales tax will expire sooner, she said.

“It does not come back ever again,” Hernandez said. “The city is not on the hook financially at all.”

Among the benefits of the development touted by city officials are the shopping dollars it will recapture from Jefferson Parish, the return of a major publicly-owned vacant parcel to commerce, and 217 retails jobs with salaries that pay from $28,000 to $60,000.

More than 80 neighbors of the project, however, expressed a sort of muted skepticism at Thursday’s meeting, filtered by a question-and-answer session handled via written comment cards. A flyer circulated before the meeting questioned why such a high sales tax would be imposed in the Central City neighborhood, and many of the questions asked had a similar tone. They included:

Although the City Council has already passed legislation authorizing the creation of an economic development district governing the project, it will hold a public hearing on the project on the day of the next City Council meeting, Nov. 21. At that meeting, Quirk said, the Council will vote to levy the new sales tax and authorize the bonds for the project.

At the close of Thursday night’s forum, Cantrell praised the residents for the tenacity in their questions, and encouraged them to appear at the meeting to pursue them further. But ultimately, she said, the benefit of the project to Central City will justify the new tax.

“I want to see Claiborne Avenue better than it’s ever been,” Cantrell said. “It’s about investing in our community, and providing a tipping point that could further redevelopment Claiborne and spill into our neighborhoods.”