Cathy Rickmon (left) and Martha Bullock (right) sit on the Baudin St. porch where their sons Orlando “Lanny” Rickmon and Desmond O’Neal Bell were murdered on April 23, 2013. “Losing a child is like losing half a heart,” said Rickmon. (Sabree Hill, UptownMessenger.com)

Cathy Rickmon and Martha Bullock had been casual friends for years, but a burst of violence in Mid-City sealed their fates together forever.

“We weren’t close until the tragedy of our sons,” Rickmon said.

“We will always have a bond because someone who we loved, that we loved very dearly, was lost on the same day,” said Bullock.

Rickmon’s 26-year-old son, Orlando “Lanny” Rickmon, was proud to call himself a Mama’s boy. He was everyone’s friend, always laughing and joking around, with special places in his heart for his daughter, his car and his mother’s cooking.

“I miss him saying, ‘You cooked! You cooked!’” said Rickmon, a cook at a local High School.

Bullock’s 22-year-old son, Desmond O’Neal Bell, was talented at playing football and music early on. He played the trumpet in his school marching bands, and his parents would always march with the band during Mardi Gras parades. Good at school and great with computers, Bullock was working at a glass shop at the time of his death, but planned to go to college for computer technology. He also loved fixing ceiling fans or other electrical things around the house.

“He was my handyman,” Bullock said.

In February of 2013, Lanny was shot 13 times on Toledano Street, but survived after driving himself to the hospital. Doctors said that with the gunshots Lanny received, he was fortunate to have survived, Rickmon said.

Two months later, on April 23, Desmond, a resident of Eastern New Orleans, was planning to meet his mother to take her car to the carwash, but stopped to charge a new phone and visit with friends on Baudin Street first.

That same day, still recovering from his gunshots, Lanny asked his mom to make him one of his favorite dishes, Italian chicken. Around 4:30 p.m., as she walked to a store on Peters Street for the ingredients, Rickmon passed Lanny on the porch of his cousin’s house, still wearing his pajama pants.

“Come here, Stinker, I love you,” Lanny said, using his pet name for her and promising to be home in time for dinner.

“You always hear about it what other families go through, but you never think you will,” Bullock said. “You never think that you will be a statistic, and now I am.”

“I hear about it on TV, but I never thought it would hit me,” said Rickmon.

The day of Desmond’s funeral, Bullock screamed and cried for two hours before being able to view her son. She still has never been able bring herself to read an autopsy or police report.

“I am not strong enough to know how he suffered,” said Bullock. “I don’t know if I ever will.”

Rickmon still finds herself buying Lanny’s favorite cookies at the grocery store. When his favorite Saints player, Lance Moore, made a touchdown against the Buffalo Bills in late October, Rickmon yelled Lanny’s name out before realizing he wasn’t there.

“One thing that really bothers me is that I don’t have anything to remember him by, like a wife or daughter. He never lived his life to the fullest. He was my only son,” Bullock said. “Even though he is not with me I thank God each and everyday for choosing me to be his mother.”

Bullock and Rickmon began talking several times a day after their sons were killed. When Bullock found out about the Helping Mothers Heal group early this summer, she and Rickmon decided to go together.

“We mourn in our own way during the week, but when we meet together on Thursday, we heal,” said Bullock.

After her first visit, Rickmon stopped going to the group for several months. She was angry about media reports that alleged Lanny was associated with a gang called the Mid-City Killers, and angry that the man charged with her son’s murder is the same man who allegedly shot him the first time.

“God helped me the first time, but the system let me down the second time,” said Rickmon, saying Lanny feared for his life after the first shooting. “I have no faith in the system.”

Both Bullock and Rickmon say their sons never went to jail for anything other than unpaid traffic tickets.

“He was nothing but a big lovable kid and was never in a gang,” said Rickmon. “He never pulled a trigger in his life.”

For Bullock, the key to moving forward lies in helping others in the same situation.

“Sometimes we mothers don’t know what our kids are into, but I know for a fact that my son wasn’t into any violent activity. I still don’t know why he is dead or not here,” Bullock said. “Every black child with dreads is not a gang member. That’s just their style. They shouldn’t be stereotyped by dreads. … It was our kids on April 23, but it could be your kids the next time.”

Martha Bullock (left) and Cathy Rickmon (right) sit on stencil art of doves by artist Justin Kray on the corner of Baudin St. where their sons were killed on April 23, 2013. “
There has to be a better way. There has to be stricter laws,” said Bullock.
(Sabree Hill, UptownMessenger.com)

Lanny at his school graduation as a child. 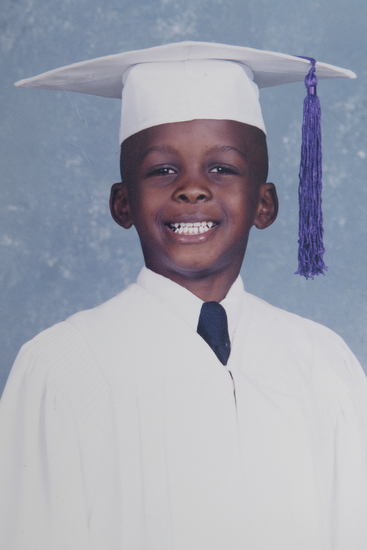 Desmond at his school graduation as a child. 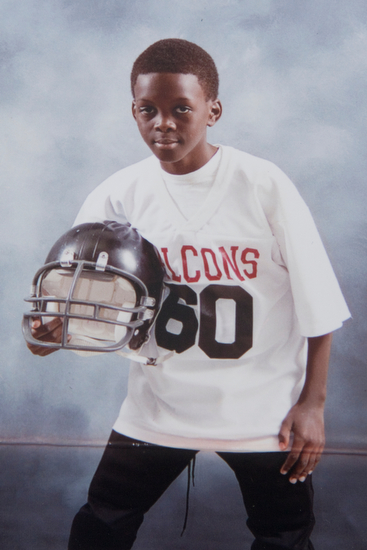 Desmond on his childhood football team.

Martha Bullock wipes a tear from her eye as she talks about her son Desmond. “It’s just the beginning. When we have a tiral, if we ever have one, we will have to live this all over again and start the healing process all over again,” said Bullock. 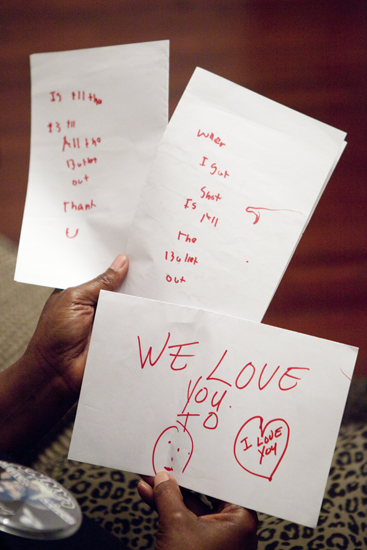 Cathy Rickmon holds notes that Lanny wrote in ICU unable to talk after being shot 13 times in February of 2013. One note asks if all the 13 bullets are out, another says I love you. (Sabree Hill, UptownMessenger.com)