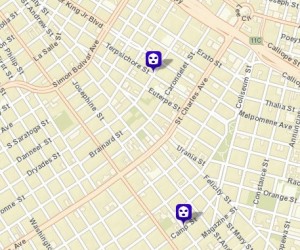 Two men — one near his car, and one after being pulled from it — were attacked and beaten by groups of assailants in a pair of separate but possibly related robberies last weekend, New Orleans police said.

In the first case, a man had left a costume party, put his costume in the car, and was walking back to the party with his keys in his hand around 11 p.m. last Friday when he was attacked by a group of teens at the intersection of Terpsichore and Baronne streets, said NOPD Sgt. Daniel Scanlan at the Sixth District’s weekly meeting of ranking officers. They beat him, took his keys and his watch, and took off in his car, a silver 2007 Honda with the license place SXY 953, Scanlan said.

Shortly before 8 p.m. Saturday, a man was sitting in his car in the 1200 block of Josephine Street near Camp when he heard a tap at the window, and then he was grabbed by a group of attackers who pulled him out of the car and beat him, Scanlan said. The attackers then drove off in his 2011 four-door Nissan with license plate XNH 519.

Both victims were injured in the beating, but neither required hospitalization, Scanlan said. Neither vehicle has been recovered.

Anyone with information or possible surveillance video from around the area is urged to call Sixth District detectives at 504-658-6060.

In the Second District, two carjackings from the Carrollton corridor do not appear to be related, said Lt. Shaun Ferguson on Wednesday. In the first, a woman leaving Costco was followed from Earhart Boulevard by two men blowing their horns at her to College Court and Pritchard Place, where they carjacked her at gunpoint, police have said. That vehicle was later found burned, Ferguson said.

In the second case, a woman pumping gas on Carrollton Avenue was accosted by a man with a gun, and her car was used in a bank robbery in Harvey later that day, police have said. Police recovered that vehicle after the robbery, and Second District detectives are working with the FBI and the Jefferson Parish Sheriff’s Office on that case, Ferguson said.

In any of the case, to leave an anonymous tip that could be eligible for a cash reward, call CrimeStoppers at 822-1111.