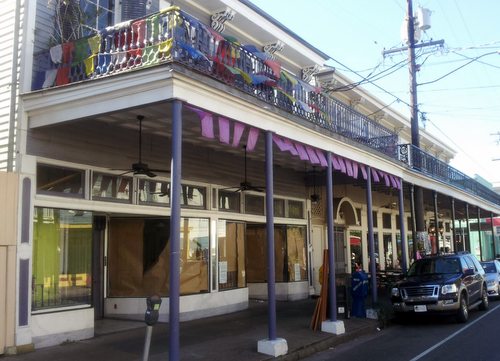 The planned location of the “Red Dog Diner” next to Rum House on Magazine Street. (Robert Morris, UptownMessenger.com)

The owners of the Rum House on Magazine Street plan to open a new restaurant next door, the “Red Dog Diner,” serving a wine-country comfort food in a casual Old World atmosphere, they said Tuesday.

Several months ago, the former yogurt shop next to the Rum House’s current Magazine Street location became available for lease, and the owners decided it would be the right opportunity to try some ideas they’d been working on for a while, said co-owner Michael Buchert. Where the Rum House menu was originally based on some of Buchert’s culinary ideas, brought to fruition by chef Terri Savoie, the Red Dog Diner will be based on Savoie’s personal cooking preferences, Buchert said.

“She’s got her own style, a healthier, revamped, gourmet comfort food,” Buchert said.

The restaurant will have some of the feel of the small diners Buchert has visited on a few trips to California wine country, he said, though perhaps more casual in feel. “Off the beaten path” or “cult” red wines are a hobby of Buchert’s, but he said that the wine list at the Rum House is often overlooked — so the Red Dog Diner will be a better showcase for it.

The Red Dog Diner — which takes its name from the owners’ fondness for Rhodesian ridgebacks — will serve breakfast every day, as well as lunch and dinner, with brunch on the weekends, Buchert said. There will some space for a more private dining area, and the building will also have space for their catering operations.

Similar to the Rum House, the diner will feature a heavy emphasis on visual design as well. The design of the space will be a “rustic, French country barn look,” Buchert said, and he has engaged artist John Bukaty to create the sort of lived-in, Old World feeling that the owners envision.

“I think it’s going to go well together,” Buchert said.

The restaurant owners hope to open by February, but first have another project on their plate: opening a second location of the Rum House in Baton Rouge. That should be finished by the end of the year, Buchert said, after which they will turn their full attention to the Red Dog Diner.

The Red Dog Diner cleared an initial hurdle on Tuesday, when it got unanimous approval from the City Planning Commission for its request for alcohol sales. Co-owner Kelly Ponder read a letter of support from the Garden District Association, and there was no opposition, so the commissioners quickly voted 8-0 to send the project to the City Council with a favorable recommendation.

Baie Rouge
Another Magazine Street restaurant, Baie Rouge, also got a similar thumbs-up from the Planning Commission on Tuesday. Owner Kimble Donington-Smith said he first applied during construction, but the City Council urged him to wait until he opened to request alcohol sales. Six months in, Donington-Smith said, the restaurant is ready.

“We would like to sell alcohol because we need more revenue,” Donington-Smith said. “I think it’s appropriate for the cuisine we’re doing.”

James Smoak of the Touro-Bouligny neighborhood said his association had held extensive conversations with Baie Rouge and reached a good-neighbor agreement, so they supported the request.

“We’ve patronized the restaurant and found it a very good place to eat,” Smoak said. “We’re looking to have this restaurant in our neighborhood for a long period of time.”

The request passed the planning commission unanimously. Both projects will require final approval from the City Council.