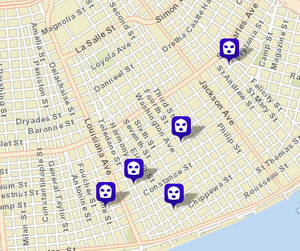 Four armed robberies and a simple robbery over the last two weeks around the Garden District. (map via NOPD.com)

Tuesday evening’s dramatic armed robbery of a Magazine Street restaurant during dinner — about which police are releasing little new information — is one of a handful of recent holdups around the Garden District area that New Orleans police are investigating, even as the overall number of robberies remains down for the year, authorities said this week.

Last week, a man walking near Camp and Washington on the evening of Oct. 6 was robbed by a man who showed him a gun in his waistband and then took his cash from him, police said at the time. Physical evidence has been recovered in that case, and it remains under active investigation, said NOPD Sgt. Danny Scanlan at the Sixth District’s weekly meeting of ranking officers on Wednesday.

Shortly after 12:30 a.m. on Oct. 11, two women leaving a bar on Magazine Street were ambushed by an armed robber who jumped out of the bushes in the 1000 block of Aline Street, Scanlan said. He demanded they drop their iPhones and to run without looking back, and they fled unharmed, Scanlan said.

That same morning, another armed robbery was reported in the 1500 block of St. Mary Street around 2:45 a.m. by a man walking home from Walgreens, Scanlan said.

Those cases were followed around 9:30 p.m. Tuesday by the robbery at Byblos, in which the gunman ordered a manager to give him money from the safe while the restaurant was open for dinner, prompting a manhunt around the block. Sixth District Lt. Frank Young, who supervises investigations, declined to release a description of the suspect or any new information about the case Wednesday, saying only that physical evidence has been recovered and is being analyzed.

Finally, an unarmed robbery was reported the same night in the Irish Channel around 10 p.m., when a man in the 700 block of Eighth Street was walking home and was greeted by two men he knew from a neighborhood bar, Scanlan said. He invited them in, but they attacked him and beat him unconscious, and when he came to, his stereo system was missing, Scanlan said.

The same victim recently had his house broken into by the same people, noted Sgt. Marc Hedgemon, and arrests are expected on that case soon.

Two other cases with robbery elements but classified differently are also under investigation. The same day as the Camp Street robbery, a home-invasion (technically classified as a burglary) was reported in the 1900 block of Foucher in the Milan neighborhood. Three people were home Oct. 6 when three assailants burst in, attempted to tie them up, demanded money and drugs and took a variety of items from the home before leaving, Scanlan said.

The shooting death of Roeldin Licona on Louisiana Avenue last week also began as a robbery of him and several others, investigators have said.

For the most part, the cases lack obvious similarities that would suggest they are linked, Young said, but detectives are not ruling out any possibilities as they continue to investigate.

All of the cases remain under active investigation, officials said. According to NOPD statistics, 49 armed robberies have been reported as of Oct. 12 in the Sixth District in 2013, down from 70 during the same time in 2012, a reduction of 30 percent.

Overall violent crime is down 23 percent, from 286 last year to 220 this year, mostly driven by a decrease in aggravated assaults. Homicides are down citywide, but are flat in the Sixth District: 20 last year and 20 this year, Bardy said. And property crimes are also essentially flat, with 1,173 reported this year over 1,154 in 2012, a 1.6-percent increase.