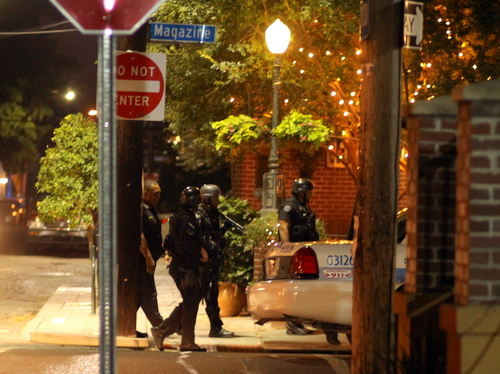 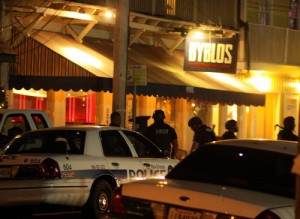 After a Magazine Street restaurant was robbed at gunpoint Tuesday evening, a manhunt for the suspect put neighboring establishments on lockdown with no one allowed to enter or leave, New Orleans police said.

The suspect held up the business in the 3200 block of Magazine shortly after 9 p.m. and then left without injuring anyone, said Officer Frank Robertson III. Responding police closed several blocks around the business as they searched to see if he was hiding nearby, Robertson said. After the SWAT Team and a police dog searched the area, Magazine Street was reopened some time after 11 p.m.

Robertson declined to name the business that was robbed, but witnesses and other Magazine Street employees said the robbery took place at Byblos when an armed man entered through the rear and robbed the manager. While police searched for the suspect, the next-door restaurants were put on a sort of lockdown, employees said.

At Reginelli’s next door to Byblos, about 40 people were inside when police came in and said no one was allowed to leave, said employee Hannah Jory. After a while, police came back and escorted the diners who were ready to go out, and then employees were told to keep those who remained inside again until the perimeter was lifted.

“For our own safety, they would not let us leave,” Jory said.

On the other side of Byblos, the Bulldog bar was given the same instruction not to let anyone come or go.

“All I know is that the employees working next door all came running out and said a guy with a gun was in the back,” said a Bulldog employee who declined to give his name.

The bar was packed at the time, he said, and the customers were not scared or panicked, but just troubled by the events folding next door. To think that someone working or eating in the next restaurant could have been harmed, he said, left the bar patrons “disheartened.”

No suspects have been identified, and no description of the suspects has been released. 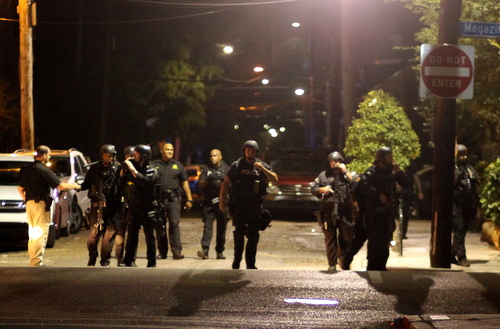