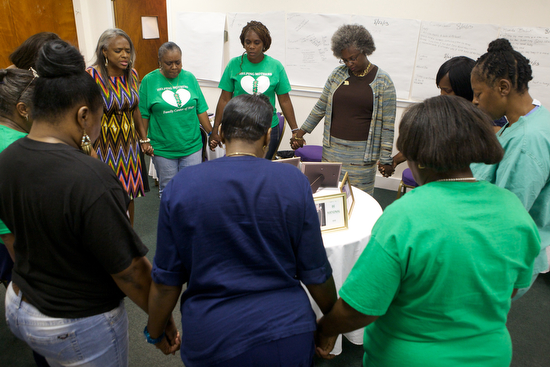 The members of “Helping Mothers Heal” gather in a prayer circle at one of their weekly meetings on September 26, 2013. Helping Mothers Heal is a group of mothers who have lost a child to violence. (Sabree Hill, UptownMessenger.com)

The grief that follows the loss of a child to violence is one of the most unbearable burdens life can impose on a mother. It is one of life’s mysteries, then, that by gathering a dozen such heavy souls in one room, the burden on all of them becomes lighter.

“It hurts deeply to lose a kid, and you just don’t know why,” said Ann Dimes, a member of the “Helping Mothers Heal” group at the Watson Teaching Ministries on St. Charles Avenue. “So you reach out to another mother, another sister … because life is precious. Life will continue to go on.”

More than a year ago, the Family Center of Hope on St. Charles Avenue held a summit on the African-American male, a two-day discussion of ways to address the ongoing violence that addresses that segment of the community. At the end of the conference, after the statistics had been shared and the solutions proffered, one grieving mother stood and asked what could be done for her, whose son was already gone.

Afterward Pat Watson met with the woman privately, and out of their communion, she formed the “Helping Mothers Heal” group — initially intended as a six-week program.

“We started out to be a group to understand the pain and the hurt in mothers who have lost their sons to violence,” Watson said. “Here we are, 16 months later, still sharing, still loving on one another, still caring.”

The pain that mothers experience is almost incomprehensible, not only to outsiders, but to the mothers themselves. Some find themselves unable to work, some turn to drugs or alcohol, and many simply wish they were dead, too, Watson said.

“Had it not been for this group, I would not be standing for you today,” said Lynn James, whose son was shot in 2009 and died afterward. “I had already planned out how I was going to do it. My family never knew anything about it. On the outside, you would have never knew, but on the inside I was dying, so I was going to make that become a reality.”

But talking through the issues with others, and especially learning how to make the unimaginable step of forgiveness toward her son’s killer, has allowed her to move forward, James said.

“Mothers, if you’re not talking about it, please,” James said. “Holding it in not going to do you any good. It’s going to bring you where your child is.”

The weekly sessions over dinner sometimes draw as many as 20 mothers, Watson said, and on Thursday’s celebration about 15 took the stage with her. When the group meets, the mothers are often at their strongest, but the strength on display Thursday night can also be deceptive, Watson said. Violence can strike anyone, and some of the mothers are professionals with advanced degrees and careers at local hospitals and universities. Others, however, have real needs, she said — no job at all, an inability to pay the bills — and the mothers’ group is another way to reach into their communities and help solve those problems on an individual basis, so that they may one day be in a position to help others.

“This group is getting them on their journey of grief,” Watson said. “But when you get to the root of it, there are other needs that are unmet.” 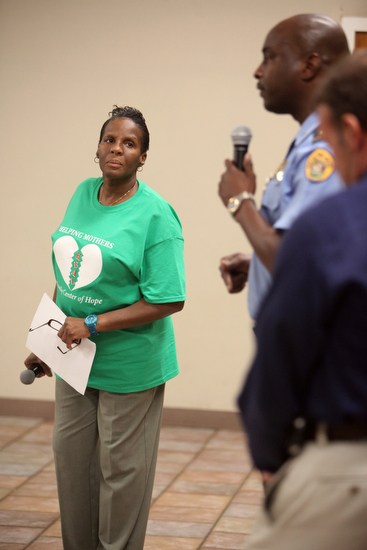 Now, after helping one another individually, the group has begun to transition toward broader, as the mothers prepare to start attacking the social problems that contributed to their sons’ loss. They have created a brochure to be distributed in hospitals and funeral homes detailing what to say to grieving mothers (that they were great moms, and that hope is ahead) and what not to say (that their child is in “a better place”). They plan to form a task force of sorts to reach mothers of new victims within 72 hours of their loss, to let them know there is a place where they can share their pain.

Further, they are education themselves on the conditions in New Orleans so they might be able to address them. On Thursday, they invited a range of local officials to their meeting — not seeking praise or congratulations from them, but to confront them with the hard questions that they struggle with on a daily basis.

“Yes, we’re hurt, and we will forever be hurt. Since the deaths of our sons, we will never be the same,” said Chanda Burkes. “But God, he has called us. You see a sisterhood of women who are ready to answer this call and answer the community.”

To District Attorney Leon Cannizzaro, who attended himself, they asked what they can do to become more involved in the prosecution of their sons’ killers. Often, they can feel disconnected from his office, they said.

That should never be the case, Cannizzaro replied, and if it has been, then he said he was there Thursday night to change it. Mothers are invaluable assets in prosecutions that he intends to take every advantage of.

“Mothers are some of the best probation officers and police officers I ever had in my court,” Cannizzaro said. “There aren’t sometimes as good detectives as mothers who lost a child in a homicide case to bring those witnesses into our office.”

The power and grace of mothers in the courtroom can be astonishing, Cannizzaro said, especially knowing that a conviction will not bring back their children. Nothing is so moving, he said, as seeing the mother of a slain young man after a trial go offer their sympathy to the mother of the man who has just been convicted.

To the New Orleans Police Department, they asked how to deal with homicide detectives who treat them like part of the problem.

“They’re treating us like, ‘If you didn’t raise your son that way, I wouldn’t have to be talking about this,'” Watson explained.

Lt. Shaun Ferguson, a former homicide supervisor who now supervises investigations in the Uptown-based Second District, apologized on behalf of the New Orleans Police Department to anyone who felt they had been treated that way. If it ever happens again, Ferguson said, ask for a ranking officer immediately.

“That is unacceptable,” Ferguson said. “If you have a problem, you call a supervisor.”

And to a representative of the mayor’s office, they asked what kind of commitment the city is making toward solving these problems.

Tyrone Walker, who spearheads faith-based initiatives in the mayor’s office, says Landrieu keeps a photo of Brianna Allen (a 5-year-old killed in the crossfire of a Central City gunfight) in his office as an ever-present reminder of the stakes in this fight. The mayor also keeps case files on all homicides in the city that are regularly updated, Walker says.

“It’s real to us,” Walker said. “It’s not just a slogan. This is about real people and real lives.”

In therapy, once an individual begins to use their creativity to solve problems or build new things, that is viewed as a sure sign that healing has taken root, Watson said. As the program grows, as they help more mothers channel their pain into action, they will begin to reach their beyond mothers to family and friends of victims, creating a citywide movement to treat the problem of violence at its source.

“We sing this song in the church, ‘There’s an army rising up,'” Watson said. “I believe this is the new army.” 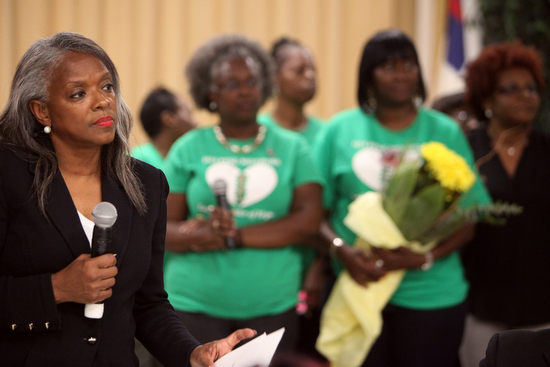 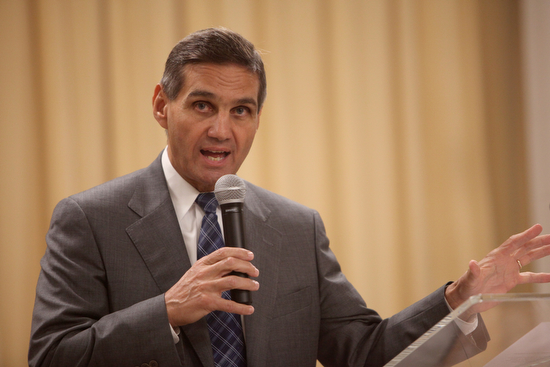 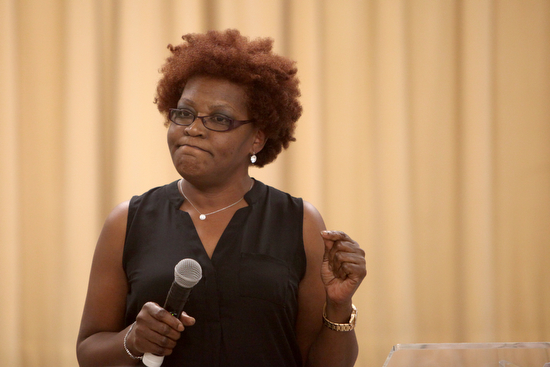 Lynn James describes her battle with pain after losing her son in a shooting. (Sabree Hill, UptownMessenger.com)