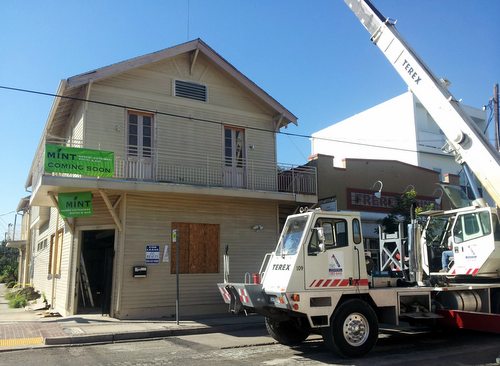 Equipment is delivered to 5100 Freret Street for the new Mint restaurant on Oct. 9. (Robert Morris, UptownMessenger.com)

A new Vietnamese restaurant called Mint plans to open next month on Freret Street, bringing yet another cuisine to the corridor’s eclectic mix of eateries.

Mint is slated for the corner building on Soniat across from Dat Dog, with two apartments above it, said Yung Ching Lau, owner of the Green Tea restaurant on Louisiana Avenue and the owner of the building. Lau will not operate the restaurant himself, but is leasing it, he said, and he expects it to be similar to some of the upscale Magazine offerings on Freret Street.

“Hopefully they are going to be open early next month,” Lau said in a phone interview earlier this week.

Last year, Freret neighbors rallied behind Lau as he attempted to buy the former Frank’s Steakhouse on Freret from the Barreca family for a mix of shops, apartments and his own restaurant, but city officials nixed his plan to demolish nearby houses for parking, citing previous failed deals on the site. Lau said he remains interested in that building as well, but the price has risen too high in the meantime.

In addition to Mint, another Vietnamese restaurant is also planned to open soon Uptown, reports Ian McNulty for The New Orleans Advocate. Pho Orchid, will expand from its location near Clearview Mall to 2135 St. Charles Avenue, the former home of Le Viet Cafe, McNulty reports.

One thought on “Mint restaurant to bring Vietnamese fare to Freret”