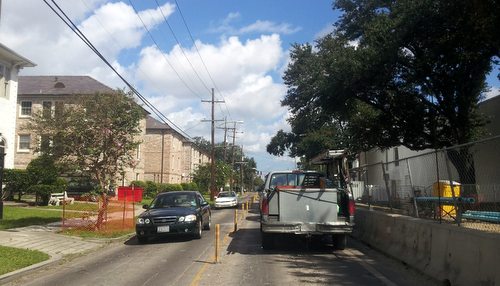 The undivided two-way traffic pattern that dominates Jefferson Avenue on the river side of St. Charles Avenue will soon extend to South Claiborne as the drainage-canal installation proceeds. (Robert Morris, UptownMessenger.com)

Although the U.S. Army Corps of Engineers is responsible for overseeing the construction of four major drainage canals around Uptown New Orleans, the federal-government shutdown caused the agency to miss a planned public meeting Thursday about the beginning of the latest phase on Jefferson Avenue.

The trees have already been cleared from the Jefferson Avenue neutral ground for the $56 million canal from South Claiborne to Dryades, and B&K Construction Co. will soon begin actual construction in the coming weeks. The first task is to relocate all the utilities — starting with a major junction at Clara Street — and traffic will be moved into the same two-way side-by-side configuration already in place on Jefferson on the riverside of St. Charles. When the actual canal construction starts, traffic will be reduced to one northbound lane, and the entire project is expected to be finished in 2017.

That information was shared at Thursday night’s meeting at the Salvation Army building by Sewerage & Water Board engineer Ron Spooner, who has been a fixture at the public meetings about the Uptown flood-control projects over the past few years. Spooner is normally joined in these presentations by his counterparts from the U.S. Army Corps of Engineers, the federal agency overseeing the project, but he said Thursday evening that the government shutdown in Washington D.C. was preventing them from attending.

“They’re here with us in spirit,” Spooner said.

After the meeting, Sewerage & Water Board president Joe Becker said the shutdown is not affecting the federal oversight of the canal installations. Engineers are still monitoring the project during the day, and the payments to the contractors are secure, he said.

“The funding for that is not impacted by the federal shutdown at all,” Becker said. “In terms of day-to-day staff, they’re still there. Construction will continue uninterrupted.”

The decision not to attend was intended as a way to conserve funds during the shutdown without impacting the essential functions of the Corps of Engineers, said Ken Holder, chief of public affairs for the New Orleans District.

“Department of Defense put out guidance that no DOD entity would participate in any outreach activities for the duration of the government shutdown,” Holder said in an email Friday morning. “We didn’t attend because we needed to stay in compliance with the guidance.”

Thus far, no employees in the New Orleans District have been furloughed, Holder said. That could change as the shutdown continues, however: The Corps of Engineers is scheduled to receive one final paycheck next week, after which staffing will be reduced, and the remaining essential employees will work without pay until government funding is restored and they are paid back, Holder said.

“At that point we will reduce down to essential personnel, and it’ll be a pretty spartan team,” Holder said.

The only change to the Corps of Engineers announced thus far has been the closure of parks and campgrounds it operates, and the New Orleans District remained active during the approach of Tropical Storm Karen.

The Jefferson Avenue meeting included a question-and-answer session about the details of the project. To read our live coverage, see below.