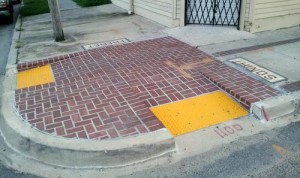 Amid the unending saga of road construction on and around their commercial corridor, Freret Street business owners greeted with weary acceptance the latest promises from city officials Monday that the next round of sidewalk repairs will be finished with only a few days of disruption on each street corner.

“I want to give you what you deserve, and I know at this point that DPW does as well,” said City Councilwoman LaToya Cantrell. “The goal is to get it done, in and out, and never have to come back again.”

The streetscape work intended to start Nov. 4 — after the road repaving is complete and the road is reopened to two-way traffic and on-street parking — will replace and repair the corner bumpouts between Jefferson and Napoleon avenues. It will also add decorative and functional elements to the corners, such as 48 bike racks and 16 iron trash cans, said Col. Mark Jernigan of the city’s Department of Public Works at an informational meeting Monday evening.

Empty tree wells will be filled with trees and decorative street-name tiles will be restored, Jernigan said. The street will also be painted with icons to remind drivers and bicyclists to share the road, he said.

The work is intended as a do-over of a similar project in 2012 that often kept contractors in front of individual corner businesses for weeks at a time. This time, Jernigan promised a very different timeline — a maximum of eight days on any one block.

“Bottom line is we’re looking at eight days per pair of intersections,” Jernigan said. “We think eight days is more than enough to get the work done. I know that’s not how it worked out in the original job, but this is a new contractor… I’m very confident they can get the work done in that amount of time.”

The work will begin at the riverside intersection of Valmont (near Jefferson) and work its way downtown, then return back up the corridor on the lakeside of the street, finishing in March, Jernigan said. By only working on one side of the street at the time, traffic can keep flowing in both directions, he said.

Andrew Amacker, president of the Neighbors United group, raised doubts about the feasibility of the eight-day schedule, since it includes weekends when the contractor is not scheduled to work. Jernigan said that the work on each corner should actually be done in fewer than eight days, and that the current schedule builds in those contingencies.

Michelle Korcz of Bright Eyes Optique said the streetscape work in 2012 started on her corner as well, but it stayed there 11 weeks, then returned for four more weeks afterward to do repairs. Eye exams are very difficult to administer when there is jackhammering just outside the room, she said.

“Last year was miserable for me,” Korcz said. “If you stick to your schedule, I’m going to be happy.”

Mojo Coffeehouse opened just before the road repaving began, and without parking, saw its business sink so low that evenings were actually busier than mornings — the normal time that coffeehouses make their money, said owner Demian Estevez. If customers are prevented from reaching the shop much longer, Mojo may not stay open until March, he said.

“If they stay on schedule and don’t close the roads, it could be all right,” Estevez said. “The only thing I wish is they would have given us a little break between constructions to recoup some money.”