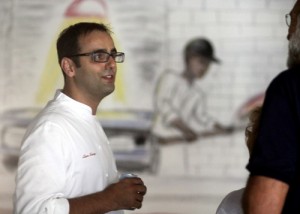 Dominica chef Alon Shaya chats with a neighbor of the proposed Magazine Street expansion at an open house in August. (UptownMessenger.com file photo by Robert Morris)

The chef and owners of John Besh’s popular Domenica restaurant told a supportive neighborhood association to “start getting hungry” for their family-oriented Magazine Street expansion as they approach a hearing before the City Council next week, despite initial resistance from the City Planning Commission.

Pizza Domenica will be a slightly more casual version of the celebrated Italian restaurant in the Roosevelt Hotel lobby, focusing on wood-fired pizzas, salads and a few appetizers but without some of the higher-end entrees. It will have roughly 70 seats in the long-unoccupied half of the Vitamin Shoppe building at 4933 Magazine, and they tentatively hope to open by the spring, said chef Alon Shaya.

“We want to have a restaurant you can come to with your kids, and you don’t have to order off a kids’ menu,” Shaya told the surrounding Faubourg Avart Neighborhood Association on Wednesday evening. “You can eat something awesome, and your kids can get a cheese pizza.”

In August, despite the outspoken support of the association, Pizza Domenica received a split 4-2 vote from the City Planning Commission on its request for alcohol sales at the location. Though more commissioners favored the plan than opposed it, five votes are needed for a recommendation in favor of such a request, and the City Council is expected to make a final decision Oct. 10. 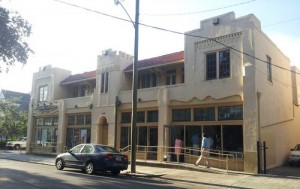 One of the residents asked the Domenica owners if the planning commission’s concerns were about go-cups and parking, to which co-owner Octavio Mantilla said “no” on go-cups and “yes” on parking. The city staff had recommended no go cups, but the Besh restaurant group uses a Mardi Gras-style cup for diners who wish to take their drinks to go and had asked for permission to do the same at the new place.

Despite a lot of local media fury about go-cups at the time, the neighborhood didn’t mind the cups, the commissioners did not seem that interested in them and Domenica doesn’t have a strong opinion on them either, Mantilla said.

“People take them home as souvenirs for the most part,” Mantilla said. “A plastic disposable cup is not our brand, not what we do. It’s not a big deal to us. We see that New Orleans loves to-go cups, and that’s the only reason we did it.”

In fact, the two commissioners who voted against Domenica said at the time their concern was parking on that stretch of Magazine, and the fact that the new restaurant is not required to provide any because it is less than 5,000 square feet. Mantilla said that they are not expecting the lack of parking to be a problem — they’ll have about 10 employees on staff at a time, and most of them won’t drive but will ride their bikes or take public transportation.

On the other hand, if customers cannot park and the restaurant is half-empty all the time because of it, Mantilla said, they will look for solutions — possibly such as leasing spaces in the evening at nearby St. Katharine Drexel Prep. As business owners, they don’t want such an expensive solution being forced upon them before a problem even exists, Mantilla said, but they will deal with it if it becomes an issue for their neighbors.

No pizza delivery is planned, he noted in response to another question, because the owners worry that the product won’t be in good shape by the time it reaches its destination.

The association membership offered no objections to the restaurant, and even asked how they could help it open — to which the owners simply asked for their support before the City Council. Shaya, the chef, said the restaurant will welcome ideas from the neighborhood as well.

“If you’re making honey in your backyard, give me a call,” Shaya said. “I might buy it from you.”

The association was holding only its second meeting after being formed earlier this year, but drew a crowd of more than 50 people to the cafeteria of St. Katharine Drexel Prep. The school has offered to let them meet there regularly, said association organizer Mark Tullis, so they plan to do so at least quarterly.

School president Joseph Peychaud said that the school had 245 students last year, graduated 45 of them, and despite all the uncertainty around the closing of Xavier Prep has 217 this year. Now that the school has completed the task of purchasing the building and reopening as an independent private school, it will be looking for community partners to help continue its mission.

“Our parent base, our student base and our community stayed with us. They didn’t leave, they didn’t run,” Peychaud said. “It is now our responsibility to ensure that the tradition continues.”

City Councilwoman LaToya Cantrell also attended, updating members on her efforts to address violent crime. The City Council will be working to improve the scrutiny on released offenders through more Probation and Parole officers and suspending the NOPD residency requirement to bolster recruiting during the current staffing shortfall. She has also supported crime-camera initiatives in the Broadmoor, Freret, Milan, Irish Channel and Tulane Avenue neighborhoods, she said, and promised to continue pushing for progress on blighted buildings.

Cantrell, herself a veteran of the Broadmoor Improvement Association, congratulated the neighborhood association on their efforts so far.