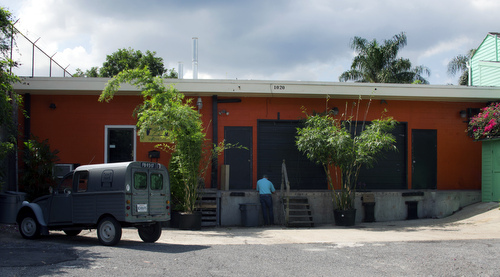 The building at 1020 Erato, currently used by the French Truck coffee company, is slated to become the home of The Courtyard Brewery. (submitted photo)

The Courtyard Brewery, a new “nano” brewery with a small taproom, is planned for a warehouse on Erato Street in the Lower Garden District, its founders told neighbors Monday night.

The brewery is planned for a building just off Magazine Street at 1020 Erato currently used by the French Truck coffee company, said founders Scott Wood and Lindsay Hellwig. Two-thirds of its 1,280 square feet would be dedicated to the brewing operation, and the remaining 350 square feet would be a taproom where customers could come sample the beers in small tasting cups, in normal-sized pints, or by filling specialized beer jugs known as “growlers,” they said.

Although they hope to eventually expand into wholesale production of bottles for home sales or kegs for sale in other bars, that’s several years down the road, with just a “tiny” brewery to start, they said. The taproom will help build an audience for their beer, they said.

“The good thing about doing it this way is we can change it from week to week,” Hellwig said.

Though Wood and Hellwig live in Lakeview, they looked all over New Orleans for the right location, and settled on the Lower Garden District because of its proximity to other landmarks for beer enthusiasts — the Avenue Pub, NOLA Brewing, and Stein’s Deli, Wood said. But the name, Courtyard Brewery, takes its name from the French Quarter apartment with a communal courtyard where Wood and Hellwig first started home-brewing.

The United States has only in the last two years reached the number of breweries it had before Prohibition, Wood noted. There are now five or six other groups of homebrewers in the city considering going into business, he said, but New Orleans is still catching up as well.

“There’s a long tradition of brewing in this city that’s missing,” Wood said.

The zoning of the property allows for the brewery — another appealing factor in the decision to choose Erato Street — but the taproom requires permission from the City Council. Before that, however, Wood, Hellwig and landlord Jesse LeBlanc wanted to meet with the Coliseum Square Association.

LeBlanc, who operates The Green House Inn bed and breakfast on Magazine Street on the same block, said his own bedroom backs up to the Courtyard Brewery building, so he wrote a restrictive lease that will keep the business from being a nuisance to neighbors. At the same time, he said, he chose to lease to Wood and Hellwig because he felt personally comfortable with them as responsible business owners.

“It’s similar to going to a winery,” Leblanc said. “It’s not about the consumption of beer; it’s about tasting beer.”

The association was strongly receptive to the idea, with many members noting that they had been to similar establishments in other cities. Their one hesitation was about the use of go cups as a potential source of litter, and Wood said he was fine with not using them, that he’d rather customers drink the beer as it was presented anyway.

“To be honest, I don’t want to be in the bar business,” Wood said.

The association quickly voted in favor of supporting the project (without the go cups). Wood said the licensing is the most time-consuming part of the opening process, but hopes The Courtyard Brewery will be in business by February or March.

“I think it’s great, because you’ll probably get a lot of draw from the Warehouse District,” said Frank Cole, a former association president.

The association also discussed the upcoming renovations at the International School of Louisiana and a city project for new signage in the neighborhood. To read our live coverage of the meeting, see below: