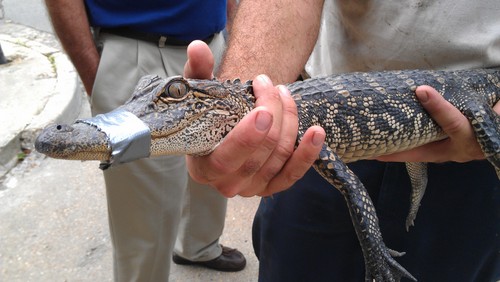 A three-foot alligator captured from near the 123 Walnut condos. (submitted photo by Claiborne Davis)

A 3-foot-long alligator was captured by workers from Audubon Zoo early Tuesday afternoon after a few days hanging around the condos at 123 Walnut Street.

According to an email from resident Jack Davis:

Wally, as he became known, was seen [Monday] walking up the first block of Walnut, between Leake and Constance, then occupying one of the storm drains at the front of the 123 Walnut condominium building. When we noticed him sticking his head out of the same storm drain at midday today, we called the Audubon Zoo, which dispatched two of their swamp-exhibit employees.

They rescued Wally from an environment that didn’t have enough water or enough food. He is said to be going to a suitable environment nearby – but not in the zoo, since he’s too small for the main swamp exhibit (the big gators would eat him) and too big for kids to pet.

The small American alligator most likely came from the Mississippi River fairly recently because it was still “extraordinarily healthy,” according to Rick Atkinson, senior curator in the zoo’s Louisiana Swamp Exhibit. Atkinson plans to release the alligator into the wild in the swampy area in Manchac, said Frank Donze, spokesman for the Audubon Nature Institute.