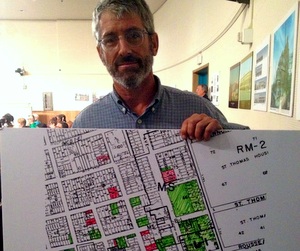 Irish Channel resident Mark Redding appeared before city council Wednesday with a map of all the blighted properties in his neighborhood. (Photo by Della Hasselle for MidCityMessenger.com)

The city claims to have reduced blight by 8,500 properties since 2010, but 37,000 remain, officials said during a committee meeting Wednesday, according to a report by Della Hasselle for MidCityMessenger.com.

During the meeting, Irish Channel resident Mark Redding appeared with a map blighted properties in his neighborhood, including the former Sara Mayo Hospital on Jackson Avenue, and beseeched the city to do better, according to Mid-City Messenger‘s report: “We want to continue to invest in the area and we think it’s moving in a good direction, but we need the city to step up and do your job. Quite frankly, we’re tired of hearing the same things,” Redding said.

One thought on ““We need the city to step up,” Irish Channel resident urges during blight forum”