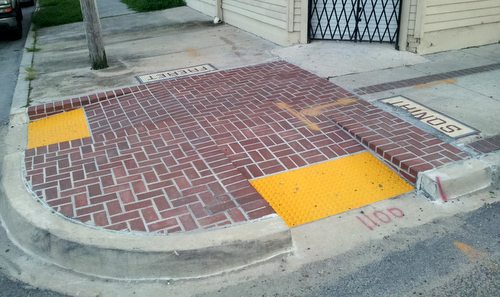 The brick “bumpout” corners installed last year on Freret Street are all scheduled to be replaced this fall, officials said. (Robert Morris, UptownMessenger.com)

The streetscape project that caused Freret Street businesses so much pain in 2012 will be repeated this fall as the city rebuilds each of those “bumpout” corners, but officials promise a quicker and smoother process this time around.

The project was intended to beautify the commercial corridor similar to Oak Street and make the street more pedestrian-friendly with large, rounded corners at intersections. It was plagued by delays, however, blocking some of Freret’s fledgling businesses for months, and by fall of last year the brickwork was already crumbling.

Josh Hartley, the Department of Public Works project manager, told merchants Monday evening at Dat Dog that the previous contractor, F.H. Paschen, will no longer be working on the project. The new contract is being finalized, and the work will begin later in the fall — likely around the same time as the Paths to Progress street repaving project is finishing up around November, Hartley said.

“There may be a slight overlap,” Hartley said.

This time, all the brick corners will be removed and reconstructed with concrete, though the basic geometry of the designs have changed very little, Hartley said. The contract will have only 90 days to do the work, and it will be finished before the 2014 Freret Street Festival on April 5, which this year drew 250,000 people.

Business owners on Freret urged Hartley to let them have more of an oversight role as the work as being performed, as their concerns about the project last year came to fruition.

“The track record of the people your department has hired is awful,” said developer Greg Ensslen.

Hartley promised to be personally involved in the project and to stay in contact with the business owners.

“I will be here very very often,” Hartley said.

The bumpout reconstruction is yet another addition to the list of construction projects that seem to enclose Freret.

Other Freret news
The association heard from a number of other speakers on Monday:

The association also continued discussion of its bylaws. To read our live coverage of the meeting, see below.