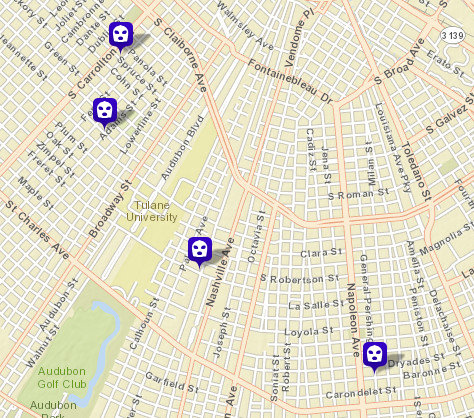 As universities begin class again and campuses come to life, the Second District police commander is urging students to exercise caution in light recent robberies of two armed robberes on Wednesday on State and General Pershing Streets, and two carjackings this weekend on Spruce and Jeanette.

Early Wednesday morning, around 1 a.m., a woman was walking on State Street near Freret when she was knocked down by a man in a ski mask, according to initial police reports. He implied he had a gun under his shirt, then stole her wallet and cell phone before fleeing the scene, the reports state.

Another armed robbery was reported around 9:40 p.m. Wednesday in the 1800 block of General Pershing Street, according to police reports. A 50-year-old woman was approached by two men who pointed a gun at her face, stole her purse and iPhone and then fled, the report states.

Around 11:20 p.m. Friday, a Tulane medical student arriving home in the 8000 block of Spruce Street was approached by three men, one of whom showed a black revolver and demanded the student’s keys, according to a Tulane Police report. The three men then left in the victim’s white Mazda 3 (Texas license plate DD3M599), the report states.

Just before 9 p.m. Saturday, a student arriving at a friend’s house in the 7700 block of Jeanette Street was approached by two men, one wearing a red bandana as a mask and the other wearing a hoodie obscuring his face, according to a Tulane Police report. One of the man had a gun, and they ordered the student to turn over his keys and other belongings, then fled in his gray 2007 Honda Civic coupe (Louisiana license plate RHU031 and an Autism Awareness fleur-de-lis magnet on the trunk), the report states.

Even though robberies in the Second District are down this year, Commander Paul Noel said students should use caution when traveling around campus at night on Wednesday’s weekly meeting of ranking officers. Noel advised students not to walk alone and to use services offered by their universities — Tulane offers night-time transportation, a shuttle service and safety escorts to students, according to the school’s website. Loyola provides similar services for its students.

Armed robberies are down about 50 percent in the Second District thus far in 2013 compared to last year, Noel said. Of the armed robberies that have occurred, he said the district has a 40-percent solve rate, and in simple robberies that rate is about 75 percent.

2 thoughts on “Amid latest Uptown robberies, police urge university students to use caution”