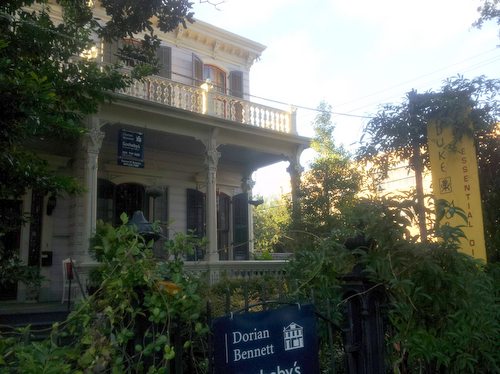 The owners of Sylvain restaurant in the French Quarter are looking at the former Duke Morgan spa on Magazine Street for an Uptown expansion. (Robert Morris, UptownMessenger.com)

The owners of Sylvain, the French Quarter gastropub that has drawn national accolades since opening in 2010, are looking at a location on Magazine Street for their next restaurant, they told neighbors this week, becoming the third proprietors of popular New Orleans downtown restaurants to announce an Uptown expansion in recent months.

The restaurant in the former spa at the corner of Fourcher Street will be similar to Sylvain in its menu, which draws from more regional Southern influences than traditional New Orleans fare, Sylvain owners Robert LeBlanc and Sean McCusker told the members of the Faubourg Delachaise Neighborhood Association at a quarterly meeting on Tuesday. The primary difference from Sylvain, they said, is for it to have a slightly more “refined,” family-style atmosphere that welcomes the nearby residents.

“One of the core concepts of this restaurant is to be a neighborhood place,” LeBlanc said. “We want to compete with the best restaurants in the city, but set a price point so neighbors can come regularly.”

The building’s zoning already allows a restaurant, but they will need City Council permission to sell alcohol, and they are already working on a draft of a good-neighbor agreement, they said. The restaurant will have around 55 seats, including nine at the bar, but those will primarily be used for single diners, and a full menu will be offered whenever the restaurant is open, they said.

They have identified 22 off-street parking places nearby, including 12 at the WRBH reading-radio building across the street, which will be closed during the dinnertime hours when the restaurant is open. They plan to have outdoor seating, but on the front patio area on Magazine rather than the back portion that faces the neighborhood. A driveway will allow trucks to make deliveries without blocking the street, they said.

“I think you have a great plan,” said Albert Walsh, who attended the meeting. “The fact that you have off-street parking is huge.”

The renovation itself will capitalize on the home’s historic design, they said.

“It’s a beautiful building,” LeBlanc said. “As far as the interior, all we’re doing is saving what’s there.”

The working title for the new restaurant is “The Manor on Magazine,” intended to evoke both the location on Magazine Street and the intended atmosphere of a house or an old-style inn, LeBlanc said. They likened it to Brightsen’s, one of their favorite restaurants.

“It’s almost like going to someone’s house to have dinner,” McCusker said.

The restaurateurs actually prefer to draw names from history; Sylvain is named for an opera performed in New Orleans in 1796, the year its building was built. Their research on the Magazine Street building shows that it was built by a man named Edward James Cockerton in the 1880s, but did not yield any inspiration for a restaurant name.

“We can’t really name it the Cockerton House,” LeBlanc joked.

They have not yet initiated any of the permitting process with City Hall, because they wanted to meet with neighbors first, they said. They expect permits to take at least until January with another five months or so of construction afterward, with a realistic opening date of next September, they said.

“I’m sure everyone here feels like, hurry up and get it open,” said nearby resident Mary Youngblood.

The project follows similar announcements by the owners of Three Muses, a Frenchmen Street hotspot planning a location on Freret, and Domenica, which is planning a Magazine Street version of the restaurant in the Roosevelt Hotel. McCusker said they often hear from Uptown patrons that they rarely come to Sylvain because the downtown location is too busy.

“It’s the idea of bringing what we do Uptown,” McCusker said. “It’s a way to open it up to different people.”

Sylvain’s kitchen can currently only prepare eight plates at a time, so the larger new location will give the staff more room to work, perhaps expanding the menu to include more locally-grown meats and poultry, LeBlanc said. But the expansion has a personal dimension for him as well.

“Uptown is home for me,” LeBlanc said. “There’s a really romantic aspect to have your family and your restaurant so close to each other.”