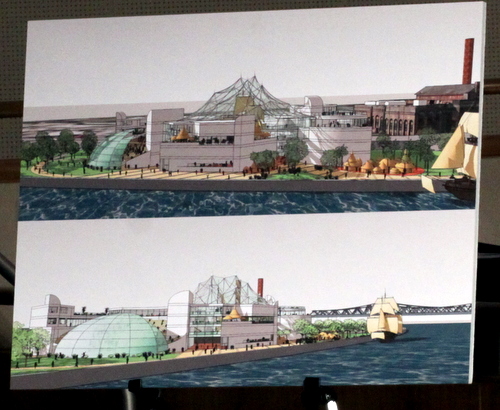 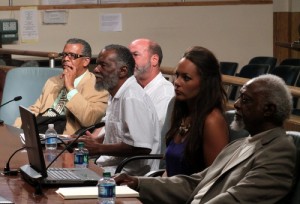 Described as a dream decades in the making with a vision that spans millennia, a museum built around a full-size replica of a slave ship is being planned for a site in the Lower Garden District riverfront near the former Entergy substation.

Lloyd Lazard, who has bee spearheading the project since the mid-1990s, architect Clifton James, Xavier University President Norman Francis and several supporters presented their proposal to the City Council’s Special Projects and Economic Development Committee. James brought a rendering of the multi-story museum to the meeting, but the project is still very much in conceptual stages, Lazard said.

The project would be located at Celeste Street, and organizers envision it as part of the city’s complete reinvention of the riverfront, from Poland Avenue downtown to Jackson Avenue in the Uptown area. The project is called the National Slave Ship Museum (on a similar scale to the $110 million National Underground Railroad Museum in Cincinnati), but it is international in scope. The core of the museum would be a drydocked replica of an 18th-century slave ship, with an amphitheatre and other features built around it. Many of the performers there — as well as the cuisine in the cafes and the wares for sale in the gift shop — would come from Africa, Lazard said.

Other features include an on-site DNA lab that would enable visitors to trace their ancestry back centuries. Inside the replica ship, one exhibit would be a simulation of the conditions on the terrible voyage across the Atlantic. And, in a second phase, a sea-worthy version of the ship (with modern safety features) would actually take visitors onto the Mississippi River — Lazard hopes to model it after the Antelope, a slave ship whose capture off the coast of Florida in 1820 led to a Supreme Court case on the illegality of the international slave trade.

So the tale of the African Diaspora would be central to the museum, Lazard said, but its concept would be even broader. Slavery has existed in many cultures throughout the world, Lazard said, mentioning stories from the Old Testament, as well as the use of slaves by the Romans, conquering tribes in Asia and even Africans enslaved by other Africans. Incorporating that history, he said, would give the museum a universal outlook that could appeal across cultures similar to the Holocaust Museum in Washington D.C. or the World War II Museum here in New Orleans.

“One component of it is incredible horror and destruction, but they’re mostly places of hope and victory and heroes,” said Michael Mayer, a West End boat builder.

Lazard traces the genesis of the slave ship project back to a 1994 Act of Congress establishing an African-American Heritage Corridor. He began advocating for the slave ship museum then, and in 2001 he received confirmation from the U.S. Department of the Interior that his vision would be a good fit for the corridor. In 2005, he received a $25,000 grant for a feasibility study that began looking for a site and comparing the project’s operations to similar museums.

“This is not a wild idea, but it’s something that makes a lot of sense and it’s time has come,” Lazard said.

City Councilwoman LaToya Cantrell compared the project to the search for an “iconic” structure on the river at the base of Canal Street. The sailing ship in the museum, she said, could serve that function as the city plans toward its tricentennial in 2018.

“New Orleans is the only city in the country that can be home for this slave ship museum,” Cantrell said.

City Councilman James Gray emphasized the academic aspect of the project. Lazard mentioned that he envisioned it as bringing together different departments and researchers from all of the city’s universities, and Gray said the knowledge created by their work would be another major benefit of the museum.

“We all have the general idea. We know millions of people were taken from their homeland and brought to the Americas as slaves,” Gray said. But many stories of heroism are overlooked — successful slave rebellions, and contributions of freed slaves in the Civil War. “We need to spend more time doing hard research about the facts of our history.”

“If you don’t tell your own story, somebody else will tell it for you,” Francis said.

Because the riverfront redevelopment is a joint project of the city and the port, Lazard said he needs the blessing of the City Council so that he can move forward seeking private investors.

“First we have to market the concept to the intelligentsia of New Orleans,” Lazard said after the meeting. “Then everyone will see the economic impact it will have.”

After the meeting, Clarkson said any council action on the project will come from Cantrell, since it is in her district, but that she expects the full council to support it.

“Of course we will be part of it,” Clarkson said.

To see the three-dimensional video rendering of the project, see below (works best in Internet Explorer):