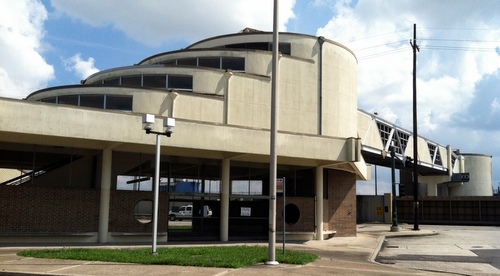 The Jackson Avenue ferry landing could be yours for just a couple of million dollars. (photo by Jean-Paul Villere for UptownMessenger.com)

Landmarks loom in high supply the Crescent City over as the landscape tends to change largely on a glacial pace.  Many distinctive structures over decades have transformed from their intended utilitarian to cozy home spaces, mostly commonly seen in the ever rarer still in commerce corner grocery turned primary residence for an owner occupant.  At auction tomorrow, if you’ve got the coin to spare, you may bid in what some may call a prime example of notable, public use spaces.  Ladies and gentlemen, may I present to you for your consideration: the Jackson Avenue Ferry Landing.

A couple of weeks back my wife and I found ourselves idling at the stoplight at Jackson and Tchoupitoulas and as my eye surveyed the very familiar intersection, this tiny sign came into view.  I squinted and realized it was a “For Sale” sign on the chain-link fence enclosing the long shuttered building on the corner.  I thought it was joke or prank on par with the “guzzled” hoo ha that just unfolded in the metro area till I went home and Googled it.  And lo and behold, the ferry landing was (is) in fact for sale.  And if you’ve got $1.65 million then it could be yours too.  Immediately my whimsy turned to Mark Twain and his relationship to the river.  With 165 linear feet of riverfront property up for grabs, in Twain’s day the offering might be a pittance to pay off a debt, or I don’t know perhaps a dowery.  By today’s standards though, this offering is kind of a big deal.  And yet, who would know?  Unless you, like me, squint at the unfamiliar while waiting for a greenlight.  (Aside, I picked a jogging in place Daniel Day-Lewis out of a French Quarter crowd months back too, but I digress.) 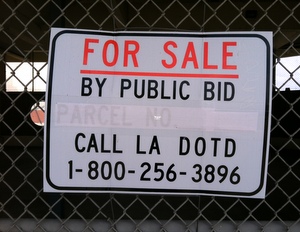 The “for sale” sign on the ferry landing. (photo by Jean-Paul Villere for UptownMessenger.com)

If the LA DOTD had hired some splashy firm to market this sale, then perhaps we’d all know about it, right?  Big 8′ x 12′ banners hanging from the crosswalk draping just above Tchoupitoulas.  That’d be tough to miss, wouldn’t it?  But then maybe that’s the plan.  Sell it, and let the masses go unalerted.  Pay no attention to the man behind the curtain with designs on the ferry landing.

And what a design it is!  The stair-stepped circles that layer to a height that provides access to the river over one of the city’s major thoroughfares.  Honestly I have always marveled at the structure, as it reminded me of something out of some Buck Rogers episode, begging for a giant Slinky to descend the building proper.  Meh, I guess that’s just how my mind works.

My greatest curiosity remains who the bidders will be, what their intentions are, and ultimately what the winner will do with it, but unfortunately from here my guess is we may only ever know the latter.  I suppose for what is being offered the sum sought might seem relatively affordable.  In terms of real estate inventory, the “one of a kind” tagline really works here as really, is there anything else like it?  And if there is, what are the chances that it too would be for sale.  Like a late night screening of the Twin Peaks movie at the Prytania, an acquisition such as this may very well be a once in a lifetime opportunity.

Me, I think I’d make it an office; what would you do with it?