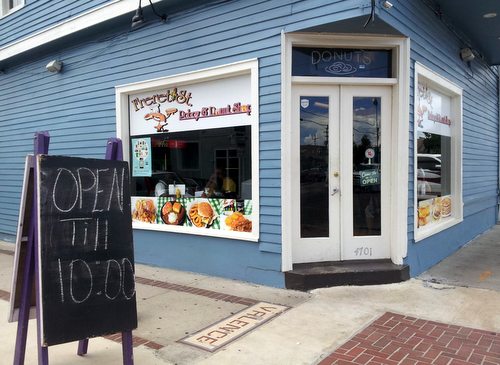 After getting some national exposure on the Travel Channel, the bright blue Freret Street Po-Boy and Donut shop has begun serving its traditional New Orleans homecooking into the evening hours — but owner Troy Rhodies is quick to point out it has nothing to do with the TV show host’s teasing during the episode.

The Travel Channel’s new show, “Best Daym Takeout,” stars gregarious YouTube restaurant reviewer Daym Patterson on a quest through major American cities looking for the best food to eat from his car. The premiere night featured an episode focused on New Orleans in which Patterson visited Freret Street Po-Boy, but even as Patterson gushed over Rhodies’ roast beef, he repeatedly chided the restaurant for closing in the mid-afternoon.

The store actually extended its hours to 10 p.m. (Tuesday through Saturday) on Aug. 16, about two weeks after the episode aired, but it wasn’t because of Patterson’s comments, Rhodies said. Instead, it was part of a planned expansion to serve the college and evening crowds now that Freret has become a more established dining destination.

“When we first came here, there was nothing on the street,” Rhodies said — referring to summer of 2009, when Freret Street Po-Boy, Sarita’s and Cure all opened as the first wave of redevelopment on the corridor. “At 5 p.m., this was a ghost town.”

Further, making donuts for the day makes for an early start to the day, so staying open into the evening would have really ramped up labor costs, Rhodies said. Now, however, with the university students returning and an ever-expanding array of choices drawing people through the corridor, Rhodies sees the evenings as a new opportunity.

“To compete, we had to find a way to stay open later,” Rhodies said.

The evening hours will feature the same basic menu of New Orleans stables such as po-boys, burgers, red beans, fried chicken, gumbo, wings and even salads, Rhodies said. They’ll increase the number of donuts they make each morning so they last longer into the evening, but once they and the daily lunch special are gone, they’re gone, he said.

Rhodies said he also expects takeout orders to be popular for downtown workers returning Uptown along the Freret corridor in the early evening. In fact, he still maintains that on a show seeking the “best takeout,” po-boys should have won by default over Willie Mae’s fried chicken or Acme crawfish.

“We were the only takeout,” Rhodies said, but says Daym’s visit was a good experience overall. “He gave us some good exposure.”