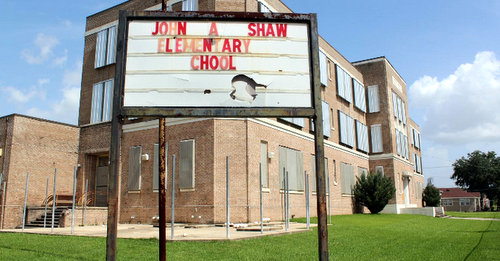 ENCORE Academy, one of the city’s newer charter schools, plans to move to a permanent location at the former John A. Shaw Elementary School building in the St. Roch neighborhood next year, school leaders said.

ENCORE, now in its second year, has been located at the Crocker school building in the Milan neighborhood, but that location was deemed a temporary one after Crocker’s governance was given to the New Orleans College Prep network. The Shaw building at 2518 Arts Street had been slated for sale at the most recent auction of surplus properties owned by the Orleans Parish School Board, but ENCORE asked that it be withdrawn under the right of first refusal that state law gives charter schools. A 2011 appraisal estimated Shaw’s value at $200,000, but that assumed a demolition of the buildings that has not been done, and the Orleans Parish School Board on Tuesday accepted ENCORE’s offer of $130,000, school leader Terri L. Smith said.

The building took more than six feet of water in the flooding after Hurricane Katrina, and part of the upstairs was damaged in a fire afterward. Smith said the first decision for school leaders will be whether to demolish the building and build from the ground up, or whether it is financially feasible to renovate some portion of it. The appraisal notes that Shaw is in “poor condition,” particularly its roof and utilities, and Smith said the extent of structural damage from the flood and the fire is still unknown.

The school will quickly pursue financing for the $9 million or so they estimate will be needed for the project, and they hope to have construction finished in time for students to move in by the start of school next fall. Many of the school projects in the New Orleans master plan take much longer, but Smith said that the flexibility of leading the work independently as a charter school should speed the process.

“The timeline is aggressive, but it’s done in other places across the country,” Smith said.

The Shaw campus is described as 40,116 square feet, but that includes a small outbuilding and a custodial cottage, leaving 33,805 square feet in the main three-story building. Smith said ENCORE would like to have about 45,000 square feet to accommodate the 500 students in preschool through eighth grade they plan for, in addition to the arts spaces for their music instruction. 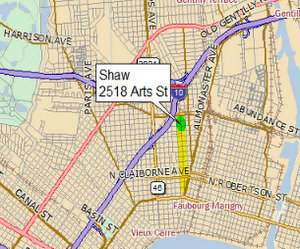 The location of the Shaw site. (map via auction documents at latterblum.com)

The north St. Roch neighborhood — not far from the Lowe’s on Elysian Fields — was already familiar to school officials, Smith said, noting that the founding board chair actually lives on Arts Street as well. Every time they went to visit the site, people were out painting homes and mowing lawns, she said. The appraisal on the building anticipated that the population within a mile of the school will grow dramatically from 19,165 in 2010 to 24,877 in 2015.

“The Shaw neighborhood really appealed to us far more than any of the other sites,” Smith said.

Smith said she has already held a school meeting to discuss the move with parents, and they asked insightful questions about the building but were generally in favor of it.

“Our parents are wonderful. There was not one person who said, ‘I think this is a bad neighborhood,'” Smith said. “They were all incredibly positive.”

ENCORE currently has 321 students, about seven more than they projected for this year with a growing English-as-a-second-language population, and they are on track for the 400 they plan next year, Smith said. They may lose some families in the move, Smith said, but she doubts it will be many — the biggest bus routes come from the Westbank, New Orleans East and the Carrollton area, not necessarily the Milan neighborhood around the school.

School leaders had previously considered the creation of an enrollment-preference district in a large, diverse ZIP code like 70115, but had held off because of their uncertainty about their future location. That conversation is likely to restart about the St. Roch area, now that they have a permanent place there, Smith said.

“I think most people would love to see New Orleans have more neighborhood schools,” Smith said.

Moving forward, the location may also give ENCORE the flexibility to think about a next step down the road, rolling its middle-school grades forward into a high school, perhaps one grade at a time. Parents of students in the sixth grade already inquire about that possibility frequently, Smith said.

“Too many of my families are already asking those questions: ‘Where are my children going to go when they finish ENCORE?'” Smith said.