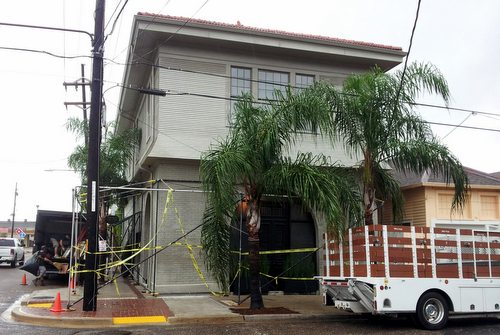 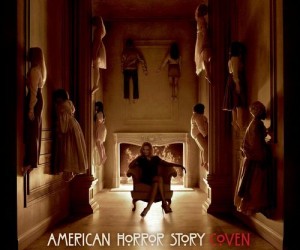 A promotional image for “American Horror Story: Coven” which is set and filmed in New Orleans. (via Facebook.com/americanhorrorstory)

Fiona and Cordelia, as the entertainment world was just discovering, are the names of Jessica Lange’s and Sarah Paulson’s characters in the upcoming third season of the notoriously macabre FX television series American Horror Story. Once again, Hollywood had returned to Freret Street.

“American Horror Story definitely wanted to use the bar as it was,” said bar owner Neal Bodenheimer. Very little was changed about the bar itself, he said — just some additional decorations added to fit timing of the scene.

Without disclosing any spoilers for the show, Virginia McCollum, the location manager for the show, said the bar on Freret was an ideal place to film the scene.

“We’ve all been to Cure at various times. We thought it would be the right part of the city for the character, kind of hip and savvy. It just felt right,” McCollum said. She said the script called for “an upscale type of eatery or club, and that fit the bill rather nicely. It’s got a certain amount of cool about it.”

Cure has been featured on the big screen a few times before, such as in the Jason Statham thriller The Mechanic (which filmed in late 2009) or more prominently the Mark Wahlberg/Russell Crowe thriller Broken City (which filmed in late 2011). But neither of those movies were set in New Orleans, and most times, Bodenheimer said the locations are substantially transformed for the filming by crew members who see a completely different potential in the building’s bones.

“They see your space as the beginning of something,” Bodenheimer said. “Everybody wants something a little different. They see something different out of your space.”

Not so with American Horror Story. The crew asked for permission for one small construction project — knocking down an interior wall to add depth to one of the back patio’s bathrooms — but then that scene was never filmed. Bodenheimer said he had been thinking of ways to rework that space anyway, so he is simply closing that bathroom temporarily while he plans its next form.

American Horror Story actually represents a second look for McCollum. She was the locations manager for all four years of Treme, and one unused storyline would have centered on a character opening a new restaurant on the Freret corridor.

“It’s been on our radar for a long time,” McCollum said. When people see it in American Horror Story, she said, she hopes they think, “That’s a cool place. Where was it filmed?”

Logistically, Freret poses the same riddle as productions in most of New Orleans: parking the large trucks. The trucks for neighborhood shoots have still gotten smaller, McCollum said, though she realizes their width still makes them an imposition. Over time, however, she hopes the exposure that Freret receives will make up for its businesses’ loss of parking for a day or two.

Despite the hints provided by the names on the trailer doors, Bodenheimer declined to discuss who he’d seen sitting at the bar for the American Horror Story shoot. It’s sort of a general policy, he said, for a bar with a national reputation visited by a number of celebrities over the years.

“We always treat them the same. They blend in,” Bodenheimer said. “One of the great things about living in New Orleans is you kind of have that New York thing where people don’t get that starstruck.”

The American Horror Story shoot concluded last Tuesday at noon, and the bar and Freret returned to normal — until the weekend, when even more trailers arrived to shoot a Will Smith feature called “Focus”, expected to wrap up at the end of the day Tuesday.