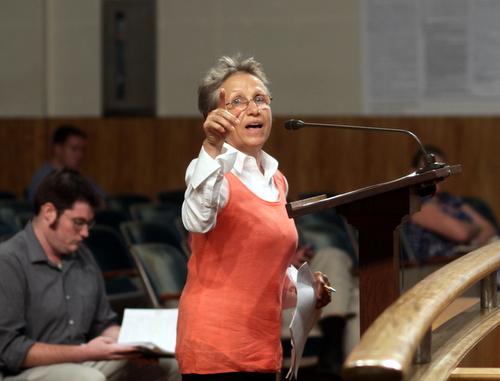 Sylvi Beaumont, owner of the proposed “Engine 37” coffee house in the former Laurel Street fire station, points to a photo of the building as she addresses the City Planning Commission on Tuesday. (Robert Morris, UptownMessenger.com)

A technicality in the city zoning code became a stumbling block for a coffee shop proposed for the former Laurel Street firehouse next to Wisner Park on Tuesday, but planning commissioners said they were opposing the project reluctantly as they passed the issue to the City Council for a final decision.

The City Planning Commission voted 6-1 to recommend that the City Council deny the project, but their sentiments were not as strong as that lopsided vote would suggest. City planning staff members said they struggled with their own decision, commissioner Robert Steeg noted the “ambivalence” in the considerations, and commissioner Kyle Wedberg said that proposed improvements to the city’s master plan would have given the commission a way to approve it.

“This is such a close call,” said Commissioner Craig Mitchell before seconding Steeg’s motion to deny the request. “All we do is make a recommendation to the [City] Council, and I think this is a decision that someone who is elected as opposed to someone who is appointed should make.”

Sylvi and John Beaumont bought the former firehouse from the city in a surplus property auction earlier this year, and plan to convert the first floor into a coffee house — which they plan to name “Engine 37” — with two upstairs apartments and one in the rear. Five neighbors showed up to Tuesday’s hearing to support the Beaumont’s idea, and two in opposition.

Those in favor said the coffeehouse will enrich the use of the neighborhood’s primary asset, Wisner Park, and that the neighborhood can absorb the additional traffic the redevelopment will bring.

“I don’t think a blighted building contributes to peace, tranquility and character,” said resident Jeff Howard. “That’s a part of the character I would rather see gone.”

Opponents countered that it is already hard to park, and that the project crams too many uses into a single building in a neighborhood where everything else is zoned for singles and doubles.

“It’s way too much,” said Bob Ferris, who has lived in the neighborhood since 1980. “Keep the zoning as it is, and that’ll be great.”

The project went into a hearing with a recommendation against its approval from the planning, based on a determination that it did not fit the city’s master plan or qualify as a “historic nonconforming use.” The issue, staff members said, is that the firehouse building had never been previously used commercially, a key requirement in the city code.

“We did struggle with this,” said Leslie Alley, deputy director of the planning commission. “This building has never been used residentially. … But, ultimately, it was that one line of ‘previous history of commercial use’ that tipped the scale for this staff.”

Sylvi Beaumont and her architect, however, argued that a first-floor business was more in keeping with the building’s history of public use than the two-family home the zoning currently calls for.

Moving forward, she said after the meeting, she plans to make the case again to the City Council.

Commissioner Royce Duplessis, the single vote in Beaumont’s favor, said after the meeting that because the planning staff was split, he wasn’t sure of the strength of the technical arguments against the coffee shop. Meanwhile, public sentiment seemed to be in its favor, Duplessis said.

“Ultimately, I think the overwhelming majority of the neighborhood wanted what’s being proposed,” Duplessis said.