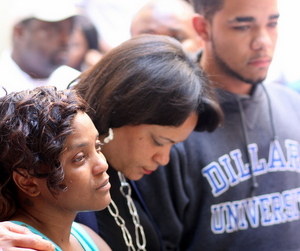 In a city where the pace of new anti-crime programs is matched year-for-year with funerals for children slain by stray bullets, a large group of New Orleans city council members and state lawmakers are now discussing ways to determine whether any of the efforts underway are actually working.

The creation of “Save Our Sons,” “NOLA For Life” and the Multi-Agency Gang Unit each year have been hopscotched by the deaths of 2-year-old Jeremy Galmon in 2010, 23-month-old Keira Holmes in 2011, 5-year-old Briana Allen last year and, shockingly, the deaths of 1-year-old Londyn Samuels and 11-year-old Arabiana Gayles just days apart at the end of this summer, all struck down by cruelly careless gunfire.

City Councilwoman LaToya Cantrell had only been in elected office nine months when Samuels was killed in her district. Within days, she convened a summit of other City Council members, state lawmakers, judges and law-enforcement officials to discuss what more can be done on the violence issue. A common theme emerged, that more oversight is needed everywhere — of the New Orleans Police Department and its leadership, of the anti-crime programs in place, of the budgets for those entities and of the state law-enforcement agencies that also play crucial roles.

“Historically, the council has been really hands off on the police in general,” said state Sen. J.P. Morrell, one of the participants in Cantrell’s summit. “Both on the state and local level, we have to get more invested in the nuts and bolts of the different crime-fighting tools available to us.”

‘More police’?
One major area of concern is the number of officers on the streets. In early August, WWL-TV reported that 1,216 officers remain in the department, down from more than 1,500 in 2010, and with an officer leaving roughly every other day. There is a new recruit class of 24 officers, but WWL counted 37 officers leaving the department in a two-month period this summer. And it is unclear what the city is doing to staunch the flow, a situation the lawmakers described as untenable.

“Morale is extremely low,” Cantrell said. “Leadership matters. We can’t even keep the officers we have.”

The numbers for the next incoming recruit class are even smaller, and a number of reasons may be to blame, Morrell said. Officers are required to live in New Orleans, but that is increasingly difficult on a police officer’s salary, and limits applicants who may have other reasons, like their children’s schools, for wanting to live elsewhere, Morrell said. Other jurisdictions offer financial incentives and cost-of-living bonuses for officers who live in their cities, to encourage new officers to move into the city voluntarily, rather than limiting the applicant pool by making it a requirement.

Further, the restrictions on off-duty details as a result of the consent decree further reduce officers’ incomes, Morrell said. And the officers allowed to participate in the details must already be free of pending disciplinary actions — in other words, some of the department’s best officers are seeing their salaries decrease the most.

“These are a group of people we depend on, but we’re not giving them the resources that show them they have any worth,” said Councilwoman Cynthia Hedge-Morrell.

Even seemingly minor policy changes can have an impact, lawmakers said. Many young members of the armed forces today have tattoos, contrary to the department’s new ban on body art, so a tattooed Navy Seal returning from overseas has to consider wearing long sleeves to cover them in the New Orleans summer.

“No one wants to work for this chief,” she said. “That’s not something we should tap dance around. It’s not working. His leadership is not working.”

‘An oversight obligation’
The staffing issue also figures prominently into another issue: the departmental budget. The Council approved a budget that called for 1,275 officers — if the actual number is falling below that figure, how is the money being spent? Several lawmakers and council members noted that their participation in the city budget seems limited to the month or so of hearings before it is approved each year, rather than seeking continual updates.

The City Council also needs more information about how the consent decree will be funded, several lawmakers said.

“We need to be somewhat more involved in the formation of the budget, not just making sure it is balanced in the last month, and moving small amounts of money around,” said City Councilwoman Susan Guidry.

The criminal-justice committee chaired by Guidry, several officials said, would be the ideal vehicle to seek more of these answers. Guidry noted that the committee has been aggressive in seeking individual budgets for agencies funded by the city, but others suggested more direct questioning of the NOPD leadership is needed.

Murder rates are down, but still astronomical, and Councilwoman Stacy Head said she is unsure whether they even tell an accurate story. More important, she said, should be the rate of shootings with injuries, since all that separates some shootings from murders is luck of the aim, divine intervention or skill of a surgeon.

The City Council should be setting its own accountability measures that it holds the police department to, Head said.

“The only real power we have as a council at this point is holding the executive branch accountable and trying to push them to do a better job,” Head said. “The particular decisions as to how money is spent lie in executive branch. As council members, we have an oversight obligation to make it clear that those efforts are not acceptable when they are not acceptable.”

Head said she wants more data on why police officers are leaving, perhaps compiled from exit interviews, if those are even being conducted. Rather than a committee meeting, the issues may be better addressed by convening a special City Council meeting on the police department alone, she said.

Another area that the council is considering for increased scrutiny is the umbrella of programs and projects known as “NOLA for Life.”

“When it gets to budgeting, we have to make sure our priorities are aligned with the line-item allocations,” Cantrell said. “We can’t say build more libraries instead of jails if zero money is coming for libraries.”

Finally, although the outsized murder rates are centered in Orleans Parish, the burden for addressing them does not fall on City Hall and the New Orleans Police Department alone. State lawmakers conceded that many agencies under their purview, such as the Department of Family Services, need more scrutiny as well.

Probation and Parole officers fall under the state Department of Corrections, and several of the lawmakers agreed that they represent a severely overworked and underutilized resource. About four dozen officers are assigned to oversee about 7,000 offenders, resulting in very little oversight at all, Morrell said.

“One of the greatest tools you have is a parole and probation officer,” Morrell said. “If a parolee’s house smells of marijuana and crack, they just walk in and that person just goes to jail. It’s one of the most seamless ways to target people who perpetrate violent crime.”

‘Not the same-old’
All the participants in the talks acknowledged that meetings full of people talking about these problems have been going on for years, with little to show for it. But, they said, something seemed different this time.

The parents of Londyn Samuels — Andrea Samuels and Keion Reed — addressed the lawmakers at the start of the meeting. They talked about the pain of losing their daughter, and their frustration at the violence and lack of respect for human life on their streets. They pleaded for protection for their community, and for the lawmakers to find a way to act, the meeting participants said.

“I think it’s hard for people to talk over and talk around each other, when you see a young mother grappling with that loss,” Morrell said. “When you see them there and see what they’re going through, it immediately invests you in the conversation you’re about to have.”

“Sometimes I get this feeling that people in elected office have become numb, and that upsets me,” Head said. “It’s evident from [Cantrell’s] call and the response from so many elected officials that there’s a lot more frustration and anger in trying to fix the problems than a pessimist would believe.”

“Maybe this is different. This is not the same-old, talking about the issue where we do nothing,” Cantrell said. “People felt like this was a start.”

2 thoughts on “After children’s deaths, city and state lawmakers push for more oversight of NOPD, other law enforcement agencies”