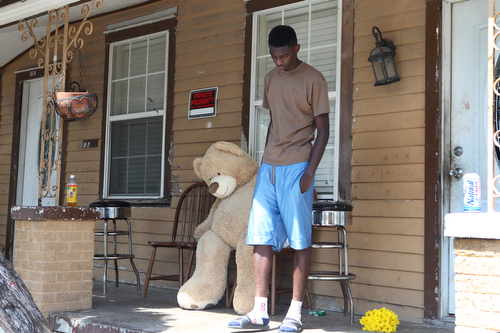 A neighbor drops off a small teddy bear at the home where an 11 year old girl was fatally shot early Monday. (Sabree Hill, UptownMessenger.com) 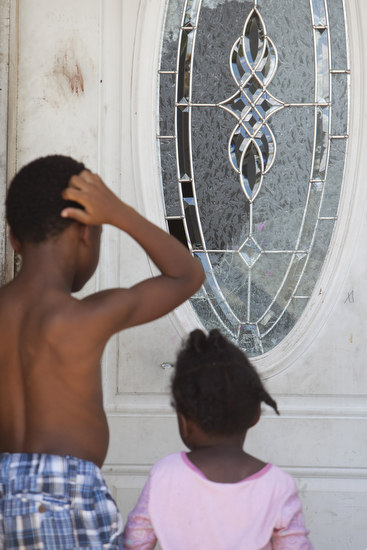 Children look at broken glass on the front door of the home where a shooting claimed the life of an eleven year old girl. (Sabree Hill, UptownMessenger.com)

An 11-year-old girl died Monday and two other people were wounded after several gunmen opened fire on the west-Carrollton home where they were all sleepign, New Orleans police said.

A family was inside a home in the 1300 block of General Ogden Street (between Plum and Willow, about a block off the upriver end of Oak) around 12:15 a.m., when unknown assailants began firing on the house, said NOPD Officer Garry Flot, a departmental spokesman. An 11-year-old girl was hit in the head and taken to the hospital in critical condition, and she died around five hours later, Flot said.

Also in the house were another 11-year-old girl who was hit in the right hand and elbow, and a 38-year-old man who was hit in the back, but their injuries were not considered life threatening, Flot said. Two other adults and several other children (whose ages range from 4 to 9 years old) sleeping inside the house were not injured, authorities said.

“Within a week’s time, two young lives were taken in our city,” Mayor Mitch Landrieu said in a statement. “Both of these unspeakable tragedies leave behind families who are searching for answers. The NOPD is working around the clock to pursue those responsible for these crimes, now we need the community to come forward with information. The violence in New Orleans won’t be stopped unless everyone gets involved.”

More than a dozen bullet casings were recovered at the scene and are being analyzed by crime lab technicians, authorities said. Because the casings are of different types, police believe multiple gunmen were firing on the house, police said.

“This is a case of unconscionable, reckless violence, which has devastated yet another New Orleans family, who must now make funeral arrangements for one of its children. And this child’s cousin must now try to heal both physically and emotionally after suffering gunshot wounds at the young age of 11,” NOPD Superintendent Ronal Serpas said in a statement. “I want the people of New Orleans to know that our Homicide division was on the scene of this crime minutes after the shots rang out, and our detectives are following up on every piece of information they have obtained. Again, we need the community to step up to assist us in making those responsible pay for their actions. They must be stopped.”

The reward for information in this case has been increased to $5,000. Anyone with information should call CrimeStoppers at 822-1111. 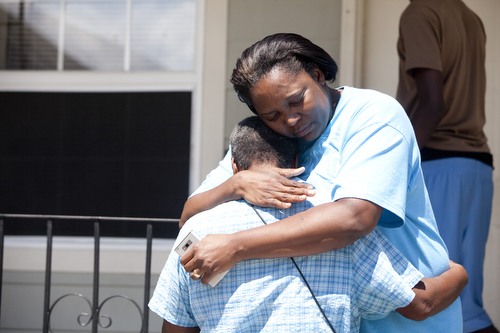 Neighbors comfort each other in the 1300 block of General Ogden St. (Sabree Hill, UptownMessenger.com)

3 thoughts on “11-year-old girl killed, others injured in shooting at west-Carrollton home”