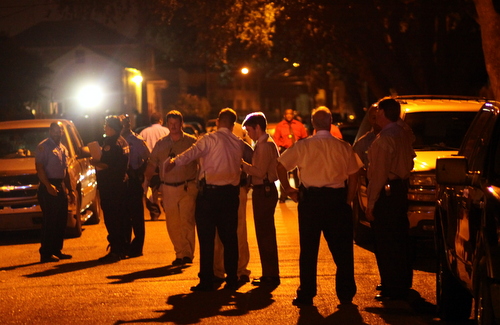 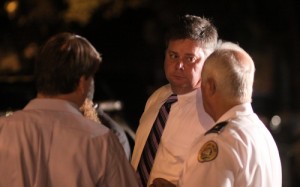 For the fourth time in as many years, a young child in Central City was gunned down Thursday evening for no reason other than the simple misfortune of being there when the shooting started.

“This is indescribable,” said Barbara Lacen-Keller, a longtime Central City activist. “There’s no way you could make a reason out of this. I know the Bible says to forgive, but, I don’t know… “

In Thursday’s case, an 18-year-old woman was babysitting a 13-month-old girl, and they were walking in the 2800 block of South Saratoga (near Washington Avenue) around 8:15 p.m. when gunshots rang out, police officials said. Both the babysitter and the child were hit, and the babysitter ran into a nearby home with the girl for help. Police and paramedics were on the scene in minutes, but the baby was pronounced dead at the hospital, police said. The babysitter required surgery, but was listed in stable condition late Thursday evening.

Investigators believe there may have been two shooters and that they were on foot, but little else is known so far, said NOPD Superintendant Ronal Serpas.

“We have no idea yet who the target was,” Serpas said.

The shooting took place not long after dusk, Serpas said, so people were around and likely saw something. He urged residents to call CrimeStoppers at 822-1111 with any information that could be useful.

“Our community rallies up every time something terrible and tragic like this happens,” Serpas said.

The child, whose name has not been released, joins a litany of others to die in Central City gun violence in recent years. Jeremy Galmon, age 2, was killed in September of 2010 in a shooting after a second-line parade had passed. Keira Holmes, four days shy of her second birthday, was killed in December 2011 in the courtyard of the B.W. Cooper housing development in a hail of bullets allegedly fired by a group of men chasing one of their enemies. In May of 2012, Briana Allen caught a lethal bullet after a gunfight broke out near a birthday party she was attending. True to Serpas’ words, arrests have been made in each of those killings.

On Thursday evening, neighbors all described the injured babysitter as a “nice” or “sweet” girl. One woman, a family friend, drove to the house from the Westbank when she heard the news of the shooting. She could not think of a reason why anyone would want to hurt the girl, she said.

“I don’t see how that happened. I’ve never seen [the victim] into it with nobody,” said the woman, who declined to give her name. “But I’m not around all the time, and you can’t say what kids do and don’t do.” 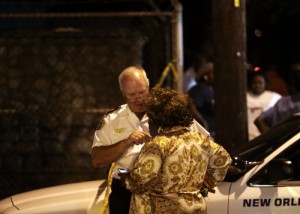 The shooting drew unusually quiet crowds all around the corner of Washington and Saratoga, right next to Lafayette Cemetery No. 2. Two women watching said they had only come over to see what happened, but that they didn’t know the family well.

“I hope they’re all right,” one of the women said quietly.

“The baby is dead,” the other woman replied. “How are they ‘all right’?”

The relative calm around the crime scene was broken only once, when a woman emerged from a nearby barroom shouting at the top of her lungs.

“This is Katrina! Water all over our fucking heads!” she cried to everyone around, but no one in particular. “A child gets fucking killed? It could have been my grandchild! This is Katrina!”

Lacen-Keller, an aide to City Councilwoman Stacy Head often described as the “mayor” of Central City, took immediate exception to the woman’s sentiment. 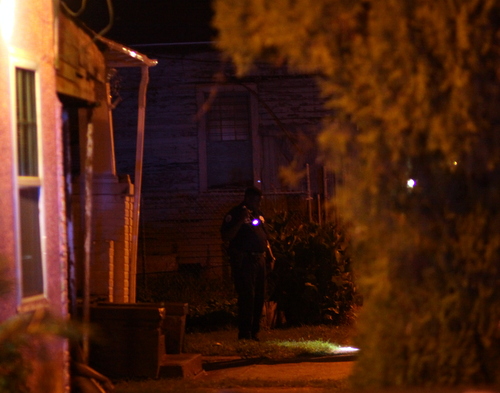 An officer looks for evidence in a South Saratoga yard after the shooting. (Robert Morris, UptownMessenger.com)

[Note: This article was first published at 9:29 p.m. Thursday, and updated with new information continuously until 1:05 a.m. Friday]