“To-go cups or not to-go cups, that is the question.
Whether ‘tis nobler in a bar to provide cups for patrons
to carry their alcoholic beverage out into the street,
Or to take arms against a sea of bureaucrats and busybodies,
and by opposing, end them?”

For those who have been living under a rock this past week, there has been a debate in local media over a perceived attack on a venerable New Orleans institution.  I am speaking, of course, of to-go cups offered by bars.  The fracas is over whether there is an actual crackdown on to-go cups, or whether this is just a tempest in a teapot (Spoiler alert: It’s not).

It began when a local food blog, Blackened Out, tweeted that the city was prohibiting to-go cups with virtually every new license for an Alcoholic Beverage Outlet (ABO).   In other words, we’re losing to-go cups by attrition, a message difficult to gainsay.

Other stories followed.  Where Y’at Magazine published an article comically suggesting that people could be facing arrest for simply walking down the street with a to-go cup.  Writing for Vice Magazine, journalist Michael P. Welch responded with an article entitled “Defending the Daiquiri and New Orleans’ Go Cup Culture” in which he recounted a number of recent battles over to-go cups.

Next, NOLA Defender replied with a piece of its own, deeming Welch’s article and others similar pieces “sensationalized.”  They noted that while there were a lot of bans on to-go cups, “there’s no citywide policy designed to target go-cups.”  NOLA Defender proceeded to argue that bans on to-go cups are not a recent phenomenon, and then started clapping and braying like a trained seal in a show of deference towards city officials (ok, I may have made that last part up).

Gambit Weekly also weighed in, publishing an article tut-tutting the whole debate, arguing that the issue was limited and suggesting that it only arose when an ABO was hauled before the board or a conditional use permit was being applied for, such as in a “primarily residential area” (which is not quite accurate bars are not allowed as conditional uses in any residential zoning districts).

While there has been a great deal of sensationalism in reporting on the gradual demise of to-go cups, it has primarily consisted of misstatements suggesting that the city is banning to-go cups altogether, or that you could be arrested for having beer in an plastic cup on the street.   No changes to open container laws are in the offing.  Rather, this is yet another front in the ongoing war that pits ABOs against the city and neighborhood groups.

However, just because we’re not discussing proposed legislation doesn’t mean that we should accept the city at face value when it says “move along, there’s nothing to see here” like some cop working crowd control.  The truth is that neighborhood groups have gotten increasingly aggressive in their demands on ABOs, and the city’s enforcement efforts against ABOs have gotten far more severe.  There is movement here, even if it isn’t a united front. 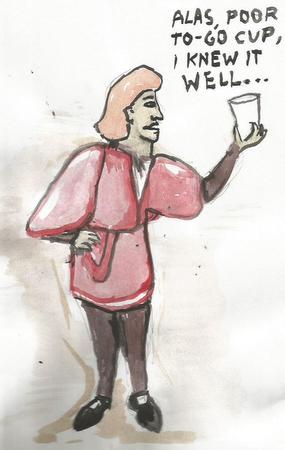 (cartoon by Owen Courreges for UptownMessenger.com)

While a great deal of the problem here concerns neighborhood organizations, i.e., meddling busybodies, it is worth observing that they have been abetted by the city.  It’s widely recognized that the City Attorney’s office has been clamping down on ABOs and really going on the offensive.  The way enforcement works, aggressive prosecution of ABOs can result in de facto restrictions.  The laundry list of remedies imposed on ABOs almost always includes restrictions on to-go cups.  Put bluntly, restricting or banning to-go cups seems to be a “go-to” restriction for the city.

With a handful of venues, the neighbors have pushed to-go cup restrictions that fall short of a ban, but seem calculated to remove the utility of to-go cups.  First, they require that the to-cups be specially designed with the ABO’s logo, a very expensive proposition.  Secondly, they typically include some restriction on patrons loitering around the ABO, one of the major reasons patrons use to-go cups to begin with. Even if the ABO decides to keep to-go cups with these types of restrictions, they could lose them later if any littering is alleged.

The reason for the dislike of to-go cups is supposedly about littering, but I think that’s largely a pretext.  It’s more about people who want their neighborhoods to be more sedate with less night life.  The idea of people being able to be outside with an alcoholic beverage doesn’t sit well with them.  They don’t stand much of a chance of revising open container laws, so this is their fallback.

That’s not New Orleans as it exists, but that’s the New Orleans they want to make.  I’m sure they have less a problem with allowing a few small entertainment districts to survive, if barely, but they don’t favor neighborhood bars and they want everyone on a short leash.

Thus, there really is a story here, but it was just ignored over the past few years.   When something happens incrementally without a fixed point of reference, it takes time before sufficient evidence comes to light and the truth is revealed.  Enough time has passed that we can now say that new bars are, in practice, simply not allowed to give to-go cups in the City of New Orleans.  It’s also clear that this is part of a wider movement against our night life.

What we need to be asking ourselves is whether this is something all of us want, or whether it’s being pushed on us by a minority – a minority that doesn’t want to let New Orleans be New Orleans.

35 thoughts on “Owen Courreges: Are go-cups about to go?”