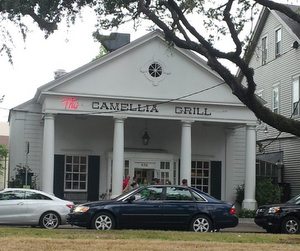 New Orleans officials have agreed to study whether to designate the Camellia Grill a historic landmark, a minor victory for the beloved restaurant’s new owner in the ongoing legal battle over its name.

In a separate request, officials turned down a request from an Xavier Prep alumna to designate the school’s Magazine Street campus as a landmark, siding with the leaders of the new St. Katharine Drexel Prep who said they face more pressing educational priorities right now other than the landmark process.

Hicham Khodr, who bought the restaurant and reopened it after Hurricane Katrina, has lost a series of court battles to former owner Michael Shwartz, who argues that Khodr broke a licensing agreement and must now change the name and the exterior appearance of the building.

Khodr has since applied for landmark status for the building, a request that appeared Thursday afternoon before the city’s Historic District Landmarks Commission. The restaurant began operating as the Camellia Grill in 1946, but the building is even older, the staff noted, and because it is now such a classic New Orleans restaurant, it deserves protection.

Irl Silverstein, who reprsents Schwartz, told the commission that while a final decision on the legal dispute is still pending before the Louisiana Supreme Court, every court up to this point has sided with Schwartz and that the final outcome will be that the name of the restaurant will change. Further, if the building remains a restaurant, its facade must change as well — so the landmark application is just a ploy by Khodr to bolster his court case.

“This commission is being used as a pawn by Mr. Khodr,” Silverstein said. “He’s lost in every other venue so far.”

Attorney Kathy Torregano, representing Khodr, argued that Khodr’s companies bought the business in 2006 prior to the licensing agreement that is now in dispute, and the trademarks were included in the sale. Thus, she said, it is incorrect to conclude that the name must change.

“We already bought it even before we entered the licensing agreement,” Torregano said.

To recommend a site for study as a landmark requires only a motion from one commissioner and two supporting votes, which the Camellia Grill application received from HDLC members Lloyd Shields, Jason Stopa and Marlene Jaffe with no discussion. There is no set length of time for the study period, HDLC staff members said afterward — that will depend on the availability of staff members to do the research.

After the study is complete, the nomination will require the full vote of the HDLC. Any decision made by the commissioners can subsequently be appealed to the City Council as well.

Thursday’s HDLC also included lengthy discussion of another application for landmark status. Amy Stelly, a graduate of Xavier University Prep, was seeking to have the school campus at 5116 Magazine designated a landmark to protect it from being sold and redeveloped.

“We do have to protect the structure, because there’s a lot of development pressure on Magazine Street,” Stelly said. “It’s a white-hot market.”

Judge Edwin Lombard and other leaders of the new St. Katharine Drexel Prep, however, opposed the nomination, saying they needed more time to determine the impact of historic designation on the school’s operations and renovation needs. He called the application insulting, saying that they did not buy the school simply to sell the building.

“I don’t understand why Ms. Stelly is fixated on some kind of notion that we are in this for some kind of profit motive,” Lombard said.

The commissioners who spoke sided with the school leaders; Commissioner Alonzo Knox, for example, said the school should be allowed to focus on stabilizing in its new form. Ultimately, none of the commissioners proposed nominating the school for landmark status, so it did not move forward for study.