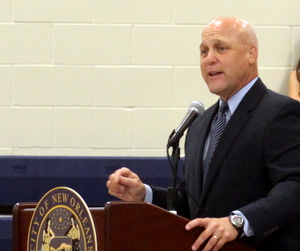 The new Second District police station — meant to replace the crumbling century-old building on Magazine Street — will be in Gert Town, likely in combination with a new Gert Town pool and possibly other facilities, New Orleans Mayor Mitch Landrieu and other officials said Wednesday evening.

“I think it will be a big shot in the arm for Gert Town,” said Deputy Mayor Cedric Grant.

The current Second District station on Magazine, dedicated in 1899 and first used as a fire house back when the pumps were still drawn by horses, is so weather worn that officers take shelter at Children’s Hospital instead during storms such as Hurricane Isaac last year. Parts of the structure are case studies in termite damage, and earlier this year, the city had to make emergency repairs to the sagging floors, after years of spot repairs elsewhere in the building by citizens groups and individuals.

A number of plans for a new station have been put forward for years. Last year the city allocated $400,000 to purchase land for the station, and the capital-projects request for the coming year calls for another $550,000 for designs. But the first task, city officials have said, was choosing a new location.

Now, the city has a destination in mind. Responding to a question from a Gert Town resident at Wednesday night’s meeting about the coming year’s budget, Landrieu said that the city intends to replace the Gert Town pool, closed after the flooding following the levee breaches after Hurricane Katrina and demolished in 2011, and that the city is also looking at the same location for the new Second District station.

“We intend to build it in Gert Town,” Landrieu said of the new police precinct.

The site would be around the former location of the Mary Church Terrell school, said Deputy Mayor Cedric Grant after the meeting, and the city has already begun discussing its possible acquisition with the Orleans Parish School Board. There are two squares of property there, one for the pool and one for the police station, Grant said, and it would offer police officers easy access to Earhart Boulevard and from there around the Second District. 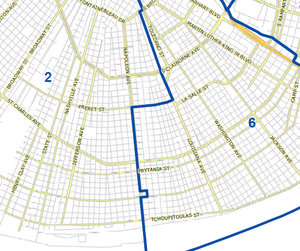 A map showing the line between the Second and Sixth police districts.

It would also be more centrally located, Grant noted. The police department redrew district lines at the beginning of 2012 to reflect population shifts and crime trends. The Second District had previously run from the Jefferson Parish line to Louisiana Avenue, but after the redistricting much of the line stopped at Napoleon Avenue. In fact, a separate block had to be cut out of the new line to keep the Second District station inside the new Second District.

“Response times would be great for the whole district,” Grant said.

Other possible sites have been discussed, such as in Hollygrove or around the Ochsner Bapist complex near Freret, but Second District Commander Paul Noel has said that the Gert Town location would be the best logistical choice for his officers. It offers plenty of room for them to park and convenient access to the major roads that serve the rest of the district.

Further, Noel told Second District residents at a community meeting in July, officers spend their entire shifts on patrol, not at the station, and they are usually dispatched to 911 calls from somewhere on the road anyway. The placement of the station won’t affect their patrol assignments, he said.

“Moving into Gert Town would be good,” NOPD Deputy Superintendent Darryl Albert, who formerly led the Second District, said at the budget meeting. “They have to move to a larger location.”

The real task before the city now, said District B Councilwoman LaToya Cantrell, is finding the best way to maximize the benefit from the public investment. The city has $7.3 million for the pool, but she hopes that by combining it with the police station, the city can find even more grants or resources for the complex, such as an additional community center. Additional partnerships with entities like Xavier University may also be possible, she said.

“We want to look at every resource available,” Cantrell said.

Charlantha Bernard, a lifelong Gert Town resident who attended the budget meeting, said afterward that she doubted there was enough publicly-owned land around the Terrell school site for both the police station and the pool, and if only one will fit, that most residents would prefer the pool. But if the city can make both complexes work, she said, it could be helpful to the community.

The wide-ranging meeting also touched on a litany of other issues. Landrieu opened by noting the role of New Orleans in the events that led to the March on Washington 50 years ago, and that while it is remembered for the Rev. Martin Luther King’s historic speech on civil rights, its real purpose was to discuss employment and economic opportunity — areas where African-Americans still have major needs today.

“There is a connection between this nation’s original sin and the level of violence on the streets,” Landrieu said.

Some of the residents at the meeting called for workforce training and other programs, while others spoke about the need for investment in Central City (including upgrades to A.L. Davis Park and the dangerous intersection of Martin Luther King Boulevard and South Claiborne Avenue) and Hoffman Triangle. Residents praised the reopening of the Lyons Center and the improvements to Wisner Park, criticized staffing levels of the New Orleans Fire Department and the lack of response from the 311 line, and asked about the city’s crime rate.

On the latter point, Landrieu noted that murder rates are down more than 25 percent from last year, the lowest the city has seen in decades. But holding that trend will require continued effort, he said.

“It’s the most important priority facing the future of our city,” Landrieu said.

2 thoughts on “Mayor: New Second District police station will be in Gert Town”