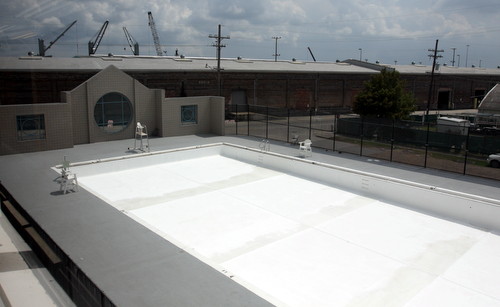 The Lyons Center pool is empty on Wednesday afternoon after all outdoor pools in the city closed Monday, July 29. (Robert Morris, UptownMessenger.com)

Less than two months after Mayor Mitch Landrieu celebrated its reopening with a jubilant splash, the pool at the Lyons Center is now closed for the summer, along with all the other outdoor pools in the city.

Closing the pools at the end of July was budgetary decision based on the return to school in August, but residents and some officials say another week or two would have been appropriate.

The pools officially closed Monday, and the one at the Lyons Center had already been drained by mid-week. Meanwhile, schools are gradually reopening around the city: the ReNEW and New Orleans College Prep systems have already begun; the KIPP system, ENCORE Academy and about a dozen other campus reopen next week, and the week of Aug. 12 brings the return of the Orleans Parish School Board and Recovery School District direct-run schools, as well as numerous others (see a citywide list of start dates at The Lens). 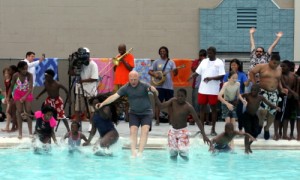 Mayor Mitch Landrieu joins hands with several children to jump into the pool at the Lyons Center at its grand re-opening ceremony June 3. (UptownMessenger.com file photo by Robert Morris)

The city had 13 pools open and staffed this summer, the most since Hurricane Katrina, said Tyler Gamble, a spokesman for the mayor.

“Traditionally, the City sees a lull in pool usage towards the end of the summer as schools begin to go back in session,” Gamble wrote in an email to Uptown Messenger. “Experience has shown this is the best practice in order to be effective and efficient with tax payer dollars.”

The July 29 pool closing was announced at the beginning of the summer, Gamble noted. Meanwhile, two indoor pools at at Joe W. Brown Park and the Treme Center remain open year-round.

“With the school year starting earlier, it was a budgetary decision to close the outdoor pools earlier since there wouldn’t be that many children using them for the cost of running the pools,” said Councilwoman Jackie Clarkson, a New Orleans Recreation Department Commission member, in a statement.

Others, however, feel the closure comes too soon. The Treme and Joe Brown pools are too far for many Uptown children with limited transportation options to reach, said Babs Johnson, a youth advocate and former member of the advisory panel that created the NORD Commission.

Given the millions spent to renovate the facility, keeping the pools open until the end of the summer would have been a good use of NOLA for Life money, Johnson said.

“I am very distressed that the majority of pools have closed…..there are many children not in school until later in August. Additionally, those in school would greatly benefit from after school swimming as well as week-end swimming with their families,” Johnson wrote. “No one can convince me that we are serious about crime until we have a thriving recreation department that serves our families, especially those most vulnerable/at risk, in a meaningful way.” 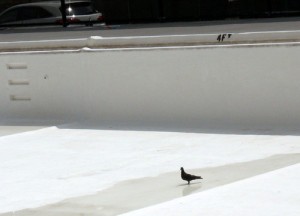 A pigeon is the lone user of the Lyons Center pool on Wednesday afternoon. (Robert Morris, UptownMessenger.com)

City Councilwoman Stacy Head said she is concerned that the decision to close the pools shows a lack of independence between the relatively new commission and the mayor’s office. Next year, she says, the hopes the commission will choose to keep the pools open longer.

“I believe that keeping the pools open one more week and/or through the weekends until Labor Day would be an appropriate use of NORDC funds,” Head said. “But it is the Commission’s ultimate decision. I plan to let the chairman know of my position for next years’ planning.”

On Wednesday afternoon, under clear skies and a scalding sun, a blue station wagon pulled up to the empty, fenced-in pool at the Lyons Center. Josephine Street resident Annalisa Nata had her granddaughter, Sophia, in the back seat, and said they have been coming to the pool at least once a week all summer. Nata said she was under the impression that the pool would be open until Labor Day, and had planned to keep coming until the little girl started school (“I’m going to kindergarten!” Sophia proudly proclaimed).

Informed that the pool was closed but that the Treme Center was open, Nata asked for directions there. The Lyons Center, she said, had a good run in its short first summer back.

“I’m glad I could use it so far, but I had hoped it would stay,” Nata said. “I don’t know why they would close it a month before school.” 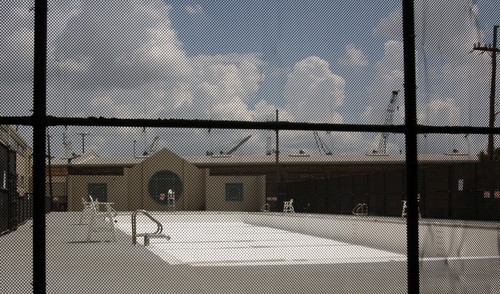 A tall fence around the Lyons Center pool warns against trespassing now that the pool is closed. (Robert Morris, UptownMessenger.com)

9 thoughts on “Lyons Center pool, all city’s other outdoor pools, now closed for the summer”