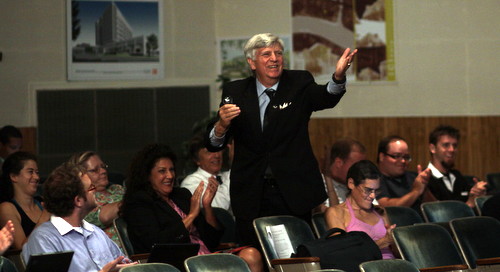 After nearly a year of struggle and discord, Jimmy’s Music Club received permission Thursday afternoon from the New Orleans City Council to reopen in a flurry of smiles, applause, blown kisses — and a long list of operating conditions.

The request by Jimmy Anselmo for alcohol sales at 8200 Willow Street — necessary since the closing last year of his previous tenant, the Frat House — has been a long and sometimes bitter fight between supporters of the storied music venue, neighbors and city officials. The Frat House closed amid allegations of underage drinking last year to the relief of neighbors, and when Anselmo subsequently sought to reopen under his club’s old name, Carrollton neighbors and Councilwoman Susan Guidry initially stood in staunch opposition.

Anselmo initially sought to challenge the city’s right to restrict alcohol sales in the Carrollton area, but eventually decided to meet with the neighbors instead. Several more months of discussions culminated in a meeting led by a professional mediator last month, and the result was a list of 17 conditions that Jimmy’s Music Club must obey. Among them:

Only two members of the public spoke about the issue, both from the Carrollton-Riverbend Neighborhood Association. Association president Martin Huber said he was comfortable supporting the club with the agreement in place.

“If the good-neighbor agreement is followed, there’s ways for us to address any issues that come,” Huber says

Guidry hailed the agreement as “rather complex but very clear” and praised the club owners and the neighbors for coming to a resolution.

“I’m really quite impressed with everyone involved with this process,” Guidry says.

Anselmo — who has addressed the council on numerous occasions in the past — did not speak on Thursday morning. But when the council voted to approve his request, he stood, took a photo of the screen showing the vote, and then blew kisses to the council members as his supporters applauded.

To read our live coverage of the discussion, see below.