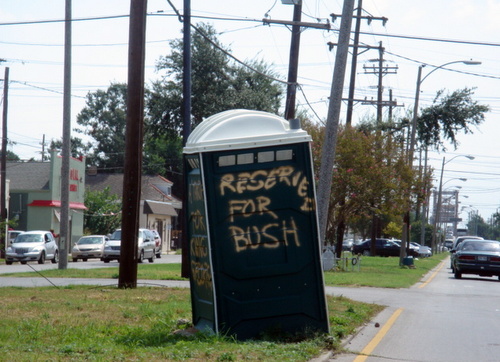 A spray-painted welcome to President Bush on St. Claude Avenue on Aug. 29, 2006. (photo by jewel bush)

When President George W. Bush’s motorcade drove down St. Claude Avenue on August 29, 2006 — the first anniversary of Hurricane Katrina — there were many signs, like sentries, stationed along his route to Fats Domino’s house in the Ninth Ward, one stop on his itinerary of ceremonial rounds.

The messages, posted on signs lined along the neutral ground and on the actual storm-clobbered buildings, weren’t flattering greetings from the city’s welcome committee. The collective reverberation to the commander in chief’s obligatory pilgrimage to the place he neglected a year earlier was that of a shimmering rage, pithy and piercing in delivery.

One of the strongest indicators of this sentiment was a lop-sided, green Port-a-Potty positioned on the very edge of the neutral ground somewhere along St. Claude, a strategic locale sure to catch the eye of, if not, the president himself, someone in his party. Among protest notes scribbled in gold spray paint on all four sides of this freestanding structure, the standout read: “Reserved for Bush.”

This silent, stoic demonstration captured the hearts and gripes of the city in that particular moment. And remains one of the most brilliant forms of protest art I’ve ever seen especially since New Orleanians understand the value of bathroom privileges — à la carnival — with ditties even written about the subject.

The impression that dumpy portable toilet made on me remains as I still contemplate how to answer questions on the recovery of New Orleans nearly a decade after the levees broke. My answer depends on whether someone has broken into my car the night before or whether I’ve hit an unmarked, canyon-sized pothole or whether there’s a random boil water advisory or I spy a shotgun double renting for New York City rates. My answer depends on whether I slow down long enough to marvel at how really beautiful the architectural landscape is or consider what it meant for the ancestors to dance the calinda or beat the bamboula in Congo Square or whenever I’m reminded of a childhood comment I made about the boats taking a bath in the muddy Mississippi River.

New Orleans is no longer a national priority. Sympathy has waned for our city as other tragedies and natural disasters overshadow Katrina, which is now considered old news. Today, we’d probably have a Port-a-Potty outside the old shuttered Charity Hospital or on the University of New Orleans’ campus chiding Governor Bobby Jindal’s deep budget cuts on the higher education front and his egregious disregard for the healthcare needs, especially mental health, of Louisianians.

Eight years later, presidents no longer visit New Orleans on the Katrina anniversary. But we don’t have that luxury of tuning out, because our lives are forever marked by the terms “before Katrina” or “post-Katrina.”

7 thoughts on “jewel bush: Will New Orleans ever be ‘post-Katrina’?”