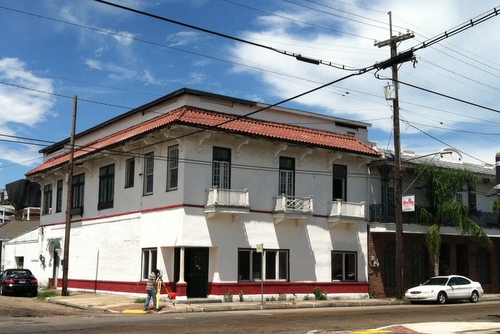 A surveyor outside the Barreca building on Freret Street. (photo by Jean-Paul Villere for UptownMessenger.com)

PROLOGUE: In 2009 on Freret St at an open house I held, a septuagenarian realtor I can only imagine being more local than local sneered in my general direction as she exited, “Freret’s never coming back.”  Then being a believer myself, I felt at once insulted and repulsed, as if she’d purposely urinated on the floor and thought nothing of it.  After all, in many ways I came to feel it was her generation that had largely abandoned the city proper, swapping distinctive neighborhoods for blanched strip malls and multi-laned thoroughfares, leaving behind a devil-may-care swath of once vibrant stretches, the very core that the surrounding region’s commerce and population sprang from.  Now, in 2013, Freret crowns front pages, but without question there’s still much to be done.

Saunter down Freret and Napoleon today, and you’ll immediately be greeted by redirected traffic and pile-driving.  Annoying yes, but a larger positive at hand.  Revised drainage and fresh asphalt on the horizon.  And uninterrupted at that, the 2013 storm season still squeaking by just so, no fuss, no muss.  Make hay, New Orleanians!  That sun is still shining!  Make hay, I say.

Stroll a little further past Jena and up to Cadiz, the four corners all tell a different stories.  Noteworthy is Michelle Ingram’s boldly oranged and grammatically awesome four-legged haven in Zeus’ Place, the first to plant her flag at this intersection post Katrina.  Followed up directly across the street where Wagner’s once stood, now home to the holy trinity of yoga, 24/7 fitness, and award winning burgers.  Newest kid diagonal from Zeus’ stands Publiq House (and hey! tonight’s Bingo Night!).  And then there’s Maude: the Barreca-owned behemoth of a white whale that all told consumes more than a quarter of a city block once home to Wah Cleaners and many other long-gone, never-to-return businesses.  So what pray tell is going on there?

Survey says?  Surveying.  At least it was on Tuesday.  I noted the boys from Gandolfo Kuhn yesterday matriculating on the street corner, so I inquired as to the future of the site.  They knew nothing (or at least weren’t telling me).  So I rang the listing agent from when last it was last listed and asked again.  I was told it was being readied to be returned to market, but as to when or what the list price might be?  That was not disclosed.  But I wasn’t kidding when I referenced Herman Melville’s classic, make no mistake, this corner is Freret’s Moby Dick.

Over the course of years this site has been under contract many a time and fallen through for various reasons each go.  The most public one might have been when the buyer to be failed to achieve demolition approval of the two adjacent double shotguns up Cadiz for proposed parking.  When the ax fell on that, the buyer moved on.  Then I heard from an established architect that Trader Joe’s had heartily considered the site but in the 11th hour withdrew interest, opting to open in Baton Rouge first before taking a gamble on the Crescent City.  Two words to you Trader Joe’s: your loss.

But really let’s survey this thing.  What do you think should happen here?  I don’t want to get all Candy Chang and “I Wish This Was” on you, but what’s missing here?  Whether a single business like a grocery or a multi-use site, what in your estimation would be the best use of this corner?  Keep in mind, it’s huge and has ample parking.  Was a Trader Joe’s spot on?  Maybe the mythological rebirth of Movie Pitchers?  Perhaps a distiller?  Or maybe, just maybe, the Barreca’s have had an epiphany and they’d like to donate it for the NOPD to redevelop as a 21st century precinct?  C’mon Barrecas, you can’t take it with you.