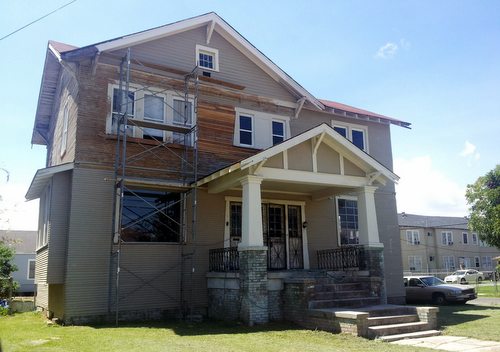 D’Artanian Stovall’s house on Upperline Street, where he is stripping and repainting one section at a time to avoid the ire of city inspectors. (Robert Morris, UptownMessenger.com)

Residents of the Freret neighborhood are banding together to help out two longtime homeowners, supporting one man in the struggle to keep the city from selling his home at sheriff’s auction and raising money with a fundraiser tonight to help repair another woman’s damaged roof.

‘From blighted to beautiful’ 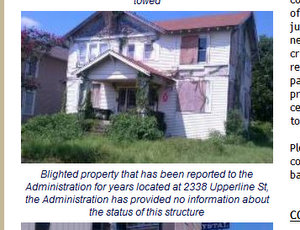 The Stovall house as featured in a 2011 edition of Stacy Head’s City Council newsletter. (via nolacouncil.com)

Two years ago, the house at 2338 Upperline Street was literally the poster child for blight in the Freret neighborhood, appearing in City Councilwoman Stacy Head’s summer newsletter as an example of neglected property that was being ignored by city officials. Now, even Head is asking the city to take the owner’s recent work into consideration.

D’Artanian Stovall estimates that his family first bought the home more than 30 years ago. After his parents died in 2003 and 2004, the house passed to him and his siblings, and he and his brother were living there in 2005. When Hurricane Katrina hit and the levees failed, Stovall was on a trip to Philadelphia, and ended up staying there for years afterward.

During that time, Stovall figured his siblings would take care of the house, but they got their own homes elsewhere. But as code-enforcement activity began to pick up around the city, Stovall decided it was time for him to take a more active role in saving his family’s house. He began traveling back to New Orleans to start working on the house himself, moving back full time and finding a job at a local law firm so he could work on the house in his spare time.

It was when Stovall began working on the house, however, that the difficulties seemed to multiply. He made a renovation agreement with the city, but as he found new structural problems that needed to be fixed, he did not finish the cosmetic repairs in time to satisfy city officials. He began getting calls and visits from people who suggested he was in over his head with repairs, and that he should just sell the place.

“He’s been feeling a lot of pressure and a lot of anxiety around the potential of losing his family home,” said Eva Sohl of the Freret Neighborhood Center.

Neighbors, meanwhile, were heartened by the improvements they saw at the place.

“He’s out there every day,” said Kellie Grengs at a Freret Neighbors United meeting last week.

Where Stovall’s house had once been a target for the Freret Neighborhood Center’s property campaign — it was large, overgrown and near both a school and a playground — they, too, became his defenders.

“All of my neighbors are in support of me taking care of my house,” Stovall said. “The very same people who were going to the city saying, ‘We have a problem with this house,’ are the absolute same individuals in support of me. If their goal is to avoid blight in the neighborhood, I’m doing that, so we have congruent goals.”

The wheels at City Hall, however, do not change direction so quickly. At a blight summit this summer with city officials, the neighborhood center’s property campaign presented a list of their current target properties, and also mentioned their support for Stovall’s renovations. The city responded with status updates on all the properties on the list — and said that Stovall’s house was headed toward a sheriff’s sale.

“We’ve got so many blighted properties that the weeds are that tall, and nobody’s around, but he’s around and he’s got the pressure on him,” said barber Stan Norwood, who counts Stovall as a childhood friend.

The Freret Neighborhood Center quickly organized a letter of support signed by 68 neighbors, urging the city to work with Stovall as he rebuilds and works to repay his back taxes. Even Stacy Head added her voice.

“I have watched this property go from blighted to beautiful. The repair work looks like it is going well,” Head wrote. “I hope code enforcement will take this into account — the owner is trying to improve his property — and reduce or eliminate the fines.”

Stovall has yet to hear back. He has addressed most of the issues in the original blight judgment — the abandoned vehicle is gone, the grass is cut and the windows are secured. As he repaints, he sands one section at a time, then primes it, then paints it — rather than doing each task all over the whole house at once — so that the house won’t appear unpainted if an inspector drives by.

“The scary thing with the city is not knowing,” Stovall said Thursday, fresh paint flecked across his clothes and his forehead. If the city sells his house, all his labor by hand could come to naught. “I understand, the people that are back, we don’t want them to live next to something no one’s taken care of. But if people are back, I don’t think the city should be fighting them in that process.” 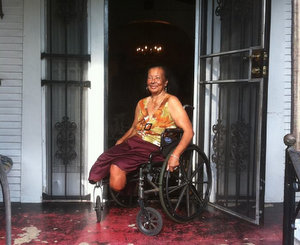 Gladys Willis, as featured on the Facebook page for her fundraiser tonight.

About a block away, neighbors and volunteers are working to secure the home of another Freret resident who, unlike Stovall, cannot do the work herself. Gladys Willis, a Robert Street resident, is an 80-year-old double amputee who lives with her son, who has cerebral palsy. Together, they live in a home in need of an emergency roof replacement, its ceiling in danger of imminent collapse every time it rains.

“Water damage caused Ms. Willis’ entire kitchen ceiling to fall away during Hurricane Issac of last year,” Charlie Barnes, an AmeriCorps alumnus, wrote recently. “Severe water damage to her bedroom ceiling suggests that it is next to collapse, posing a direct risk to Ms. Willis’ physical health and safety.”

Volunteers could repair the ceiling, Barnes realized, but first they would need a licensed contractor to replace the roof. He found an ally in Michael Collins, owner of the Other Bar on Freret Street, and a contractor himself who agreed to both host a fundraiser for Willis and to repair the roof at cost, Barnes said. And, last week, Neighbors United agreed to seed the fundraising effort with a donation of $540.

After the roof is repaired, AmeriCorps alumni will repair the ceiling, Barnes said. The project will be dedicated as a memorial to Joseph Massenburg, the AmeriCorps member who was shot to death in west Carrollton earlier this year, Barnes said.

“Ms. Willis is herself the grieving mother of two sons who, like Massenburg, were lost to gun violence years ago,” Barnes wrote. “A share of the proceeds will go toward a memorial plaque to Massenburg that Ms. Willis agreed to have mounted above her porch.”

The fundraiser runs from 5 to 8 p.m. tonight (Friday, Aug. 23) at the Other Bar, 5039 Freret, with music by the Panorama Jazz Band. Anyone who can’t attend can also donate online.

At the Freret Neighborhood Center, Sohl said the efforts on behalf of both Stovall and Willis are important for not just the individual homeowners, but also for preserving the fabric of the neighborhood as new people move in. In both cases, new residents are deepening their ties to the community that already exists in Freret by getting to know and supporting the residents who were here before the recent commercial renaissance.

“I hope this is a chance not only for neighbors to support their neighbors, but also for people new to the community to be in one place with them to support Ms. Willis,” Sohl said. “This is the kind of community building that is really crucial at a time when we’re seeing changes happen in this neighborhood.”