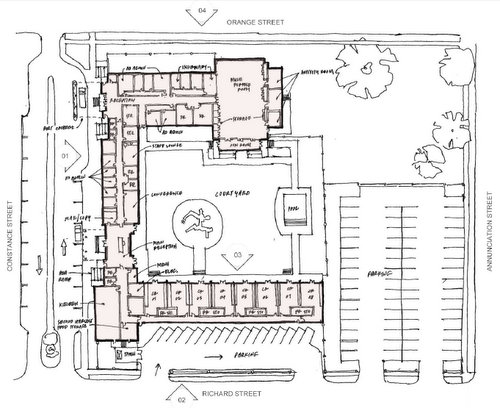 A first draft of site plans for the Kingsley House expansion presented at Monday’s meeting. (A parking lot shown on Richard is expected to be moved, officials said.)

Kingsley House, which has been providing family services and community programs for more than a century, plans to expand across the street from its Lower Garden District main campus with a new preschool and adult daycare on a long-vacant plot of land, officials told neighbors Monday evening.

The new facility will sit on the lot bounded by Orange, Richard, Annunciation streets and a closed section of Constance. The early childhood education center along Richard Street will serve about 100 children, and the adult daycare will serve roughly as many adults during business hours, said Kingsley House CEO Keith Liederman to the Coliseum Square Association at their monthly meeting Monday.

The neighborhood is strongly supportive of Kingsley House and the work it does in the community, and the design proposed by Trapolin-Peer architects is a good match with the existing buildings, said association president Jim McAlister. The board’s only request is that emergency vehicles — even if not the general public — have access to what is now the closed section of Constance Street that will become a sort of private drive, McAlister said, recalling a major fire at a Magazine Street shop that firefighters fought from the vacant lot behind it. 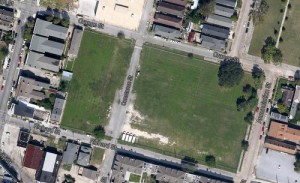 An aerial view of the lot (via Google maps)

The unusual history of the 4.2-acre lot and the closed section of Constance begins in 1969, when the city of New Orleans seized the two blocks with about 30 houses through eminent domain, intended as a new middle school, Liederman said. The section of Constance was closed, and the houses were all demolished, but stagnating public-school enrollment prevented the school from being built and it has remained vacant since then, Liederman said.

The audience at the association divided sharply over what should be done with that former section of Constance. One man said that when he lived on Constance Street, that chained-off portion of street always frustrated him. Others, however, said that the break in the street grid serves to slow traffic in the residential area, a concern that Liederman said he shared given that the people walking around the new facility will be very young, very old or have other special needs.

“There are probably advantages either way,” said architect Peter Trapolin. “I can see both sides.”

Kingsley House already has a 99-year lease on the property from the Orleans Parish School Board, and hopes to close on its purchase soon, Liederman said. City officials are reviewing the site plan, Trapolin said, and have asked that a strip of parking along Richard be moved closer to Annunciation, so that the preschool building can front directly on Richard.

The section of the lot between Constance and Magazine is not included in the current plans, and will remain vacant, Liederman said. A pre-Katrina plan called for a job-training center there, but the funding for that project has not been secured, Liederman said.

The same property was under consideration in 2011 as the temporary site for Audubon Charter School, but state officials quashed that plan after high levels of lead were found in the soil. Kingsley House officials did not describe any lead remediation plans at Monday’s meeting and could not be reached afterward.

[Update: Kingsley House plans a lead remediation at the site that is expected to cost $1 million, Liederman said in an email sent Tuesday afternoon.]

In a separate project, developers are moving forward with the construction of eight townhouses on the site of the former church that burned down in the 2100 block of Prytania, said contractor Chris Kornman of Entablature. They hope to begin construction in November or December and have new residents moving in in September of next year, he said.