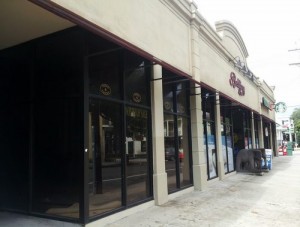 This store front on Magazine near Washington Avenue is slated to become the Bin 438 wine shop. (Robert Morris, UptownMessenger.com)

Noting a surprising lack of wine shops around the Garden District, the owners of Tujaques plan to fill that need with a new spot called Bin 428 later this fall.

Bin 428 will fill one of the three spots left by the former Prince & Pauper furniture store at 2801 Magazine Street, said Tujaques owner Mark Latter on Tuesday. Latter and his wife, Candace, have been working on the idea since last year, they said, and won easy approval from the City Planning Commission on Tuesday afternoon — a key step toward a goal of opening in November.

“There’s not a one-stop shop for wine or craft beer in the Garden District,” said Candace Latter.

The store’s name refers to the numbered bins used in wine cellars to store specific bottles, the Latter said. They initially thought about calling the store Bin 2801, for the building’s address, but instead chose something more personal: their son’s birthday is April 28, or, 4-28.

“We went with something close to our hearts,” Candace Latter said.

The City Planning Commission had no issues with the proposal. Shelley Landrieu, representing the Garden District Association, said she’s happy to see a wine store in the neighborhood, but her only concern was how the permission to sell alcohol will be limited to the specific unit in the building used by Bin 428. City officials said the Department of Safety and Permits can designate the unit a suite number and tie the conditional use for alcohol to that specific address.

With a favorable recommendation from the planning commission, all that Bin 428 needs is final clearance from the City Council to begin filling the Garden District’s wine-related needs.

“We’re starting to see the light at the end of the tunnel,” Mark Latter said.

Also before the City Planning Commission on Tuesday was the new preschool building planned by the Isidore Newman School, which also received quick approval without opposition.