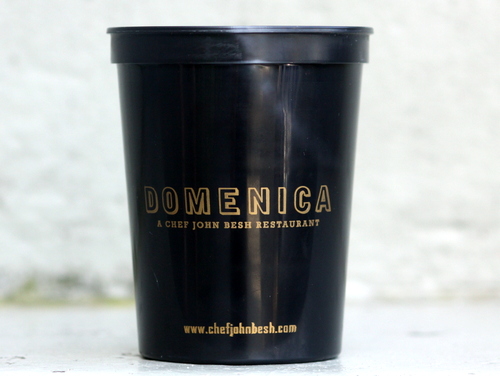 Pizza Domenica, the proposed expansion of Chef John Besh’s popular downtown pizza restaurant onto Magazine Street Uptown, will head to the City Council without a recommendation from the City Planning Commission, after a split vote by commissioners Tuesday afternoon.

Any observer might be forgiven for assuming that Pizza Domenica’s plans were scuttled by their request to allow patrons to take their drinks out the door in a plastic cup to-go. After all, go cups dominated Tuesday’s discussion of the restaurant, just as they have the New Orleans media scene in the two weeks since go-cup rights activists began warning of a looming “go-cup battle” out of City Council.

But the commissioners who voted against Pizza Domenica on Tuesday said afterward that, surprising as it sounds, the go-cup issue was not even a factor in their decision.

Besh, Domenica chef Alon Shaya and their business partners are proposing to create a casual, neighborhood-scale version of the celebrated pizza restaurant in the Roosevelt Hotel. It would be located in part of the former school building that houses the Vitamin Shoppe at Magazine and Robert, and technically needs City Council approval (starting with the planning commission) in order to sell alcohol there.

The city’s planning staff was on board, noting in its report that because the upstairs area will not be used, no parking is technically needed. Their report suggests the planning commissioners vote a favorable recommendation for Pizza Domenica, along with a number of standard operating conditions intended to keep it from morphing into a bar — food must comprise at least 50 percent of sales, it must close at midnight and no go-cups are allowed.

The neighbors, too, were happy with the plans. Robert Street resident Mark Tullis, speaking on behalf of the nearby Faubourg Avart Neighborhood Association, praised the restaurant owners for inviting neighbors over last week to see the space. They fully support the project and the staff recommendations, Tullis said, with one exception — they’d like to see the restaurant be able to offer go-cups.

“We don’t object to go-cups for the restaurant, because of the type of go-cups that we discussed with them,” Tullis said. In fact, they kind of like them. “We feel that they’re responsible and will take care to make sure they’re not littered in our neighborhood.”

“Arguably, it’s not even disposable,” Landry said. “I think most people take these home and re-use them.”

The commission then engaged in its own internal dialogue about the cups. Commission chair Kelly Brown asked the staff for clarification on why they are prohibited — is it because the permit for alcohol sales at a restaurant is specified for “on-premises” consumption?

The planning staff replied in the affirmative, adding that the intent of the proviso was to avoid creating litter in the neighborhood, but that there is no ban on the cups and that the commission can consider each case individually. Commissioner Nolan Marshall III followed up: what disposable containers other than cups are being prohibited? The staff members replied that other items, such as pizza boxes, are likely to be taken all the way to the customer’s home — not always the case with go cups.

“They finish the drink, and it tends to end up near the car, near the storm drain or in the neighbors’ bushes,” said Leslie Alley, deputy director of the planning commission. “We’re trying to keep the trash level down.”

Marshall then asked if souvenir-style cups frequently become trash, and Alley said that they do not. If they are an exception to the problem, she suggested, might be worth consideration from the commission. Commissioner Craig Mitchell then asked if the anti-litter plan required by the commission might include go-cup trash, so they don’t have to be singled out. Again, Alley agreed that might be reasonable.

With that, the go-cup discussion ended. Marshall proposed approving the restaurant and the staff’s recommendations, but striking the prohibition against go-cups. With no further comments, the commission voted 4-2 in favor of Marshall’s motion — technically falling short of the votes needed to constitute an official recommendation to the City Council to approve Pizza Domenica. Instead, the vote is considered split, known as “no legal majority,” and the City Council will be left to decide the issue on its own.

With that, the Pizza Domenica developers left the council chambers, asking one another what could explain the unexpectedly split vote. Was it the go-cups? Landry asked, acknowledging what a “hot issue” it has been around the city.

In fact, the stumbling block was parking, said both commissioners who voted against the project. During the meeting, former state Rep. Rosalind Peychaud said she was disappointed that the planning staff determined that the configuration of the building keeps Pizza Domenica under the threshold that would require off-street parking.

“I don’t know why we continue to plan destination restaurants like this in residential neighborhoods with limited parking even for the families who live there,” Peychaud said.

That concern — especially so close to St. Katharine Drexel Prep — was the deciding factor for Commissioner Mitchell and Lois Carlos-Lawrence.

“It was the parking,” Carlos-Lawrence said. “It’s so tight around that area.”

Go cups were not a factor, she said. Mitchell agreed.

Even Marshall, who made the motion in favor of the restaurant, said the parking issue was a concern for him.

“How we deal with parking in neighborhoods and Magazine Street is an ongoing battle,” Marshall said, expressing hope that other forms of transit will be part of the solution.

But the go cups? Marshall said he has no problem with them. In fact, he said with a smile, as a downtown resident himself, he understands the appeal as much as any New Orleanian should.

Clandestine on Freret
Another item on Tuesday’s agenda was a rezoning request for a property at the corner of Freret and Valmont. The property owner, Dr. T. Allen Freiberg, had expanded a small garage on the lot into an office space for the Clandestine New Orleans event-planning business next to the main building, which houses Bright Eyes Optique. The original business use there was considered a “nonconforming use” of the residential lot, so the city was requiring Freiberg get the lot rezoned for a neighborhood business to bring it all into compliance.

The staff recommendation was for approval, noting that it would then match the zoning of 95 percent of the other lots fronting along the Freret corridor. Several neighbors, however, complained about parking and traffic around Freret, saying they did not want additional rezonings for business.

After a brief discussion, Planning Commissioner Robert Steeg suggested that the request be denied. It would essentially sanction the nonconforming use there, he said, something he was hesitant to do through a zoning change. Without further comments, the commission voted 7-0 to deny the request.

Finally, two other Uptown items on the agenda received quick approval Tuesday without controversy: Kinglsey House’s plan to build an adult day care and preschool on a vacant lot in the Lower Garden District and a residential developer’s plan to put eight townhouses on the site of the former church at 2100 Prytania Street.