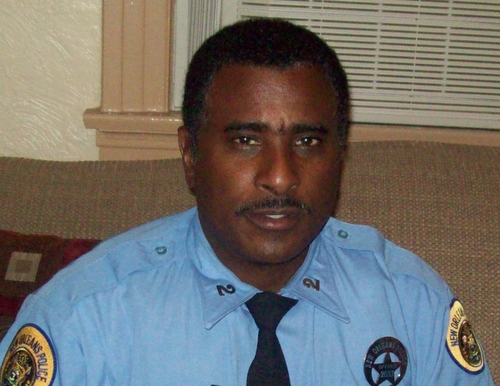 A 52-year-old New Orleans police officer who had spend his entire eight-year career with the NOPD assigned to the Uptown-based Second District was killed early Sunday in a hit-and-run crash on the Interstate 10 high rise, authorities said.

Officer Rodney Thomas was off-duty around 1 a.m. Sunday when he was involved in a minor crash on the high-rise and got out to check on the occupants of the other vehicle, authorities said. As Thomas was walking over, he was hit by a third vehicle, a late-model Porsche Panamera that was damaged in the impact and sped away, authorities said. 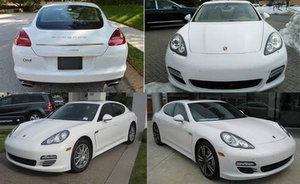 Sample image of a white Porche Panamera provide by NOPD. The actual vehicle used in the crash was damaged, authorities say.

Detectives obtained a significant amount of surveillance video as they investigated Sunday, said Remi Braden, NOPD public affairs director. CrimeStoppers is offering a $5,000 reward for information that leads to an arrest and indictment in the case.

Today the New Orleans Police Department is mourning the loss of one of its own- Officer Rodney Thomas.

Officer Thomas was involved in a minor traffic accident on the I-10 eastbound near the High Rise this morning at about 1am. He subsequently got out of his car and walked to the other vehicle involved to see if anyone was hurt. While out of his car, Thomas was struck by another vehicle, which left the scene. EMS arrived shortly after and Thomas was pronounced dead at a nearby hospital.

The vehicle that fled was damaged, and parts of it were left on the scene. Through investigation, detectives have determined that the car is a white Porsche Panamera- most likely the 2011 or 2012 model.

Rodney Thomas was hired by the NOPD in March of 2005. He worked his entire career with the department in the Second District, and became a permanent, positive fixture in the Uptown community. He leaves behind a wife and two children. Rodney Thomas was 52-years-old.

Second District Commander Paul Noel said, “Rodney was a well-liked, hard-working and dedicated police officer. He sincerely cared about the people he worked with, as well as the countless people he interacted with in this district. He was the type of officer to ‘circle back’ after meeting people and assisting them with a problem, just to check in with them again to make sure they were okay. I’m sure I speak for the entire 2nd District when I say Rodney Thomas was our dear friend, and he will be sorely missed.”

Superintendent Ronal Serpas said, “Because there are more than a thousand police officers in the NOPD, many of them I only know by acquaintance. I did not know Officer Thomas well, but it was heartwarming that so many officers I saw this morning working the Essence festivities, approached me to tell me what a wonderful, dedicated police officer and person Rodney was. He was a ‘cops’ cop’, and, from what I’ve been told, he was the ‘peoples’ cop’, too.

“I want to express condolences on behalf of the entire New Orleans Police Department to Officer Thomas’ family. He was very beloved, and this is a true loss for this community.”

As mentioned earlier, the vehicle involved is believed to be a white Porsche Panamera, a 2011 or 2012 model. If anyone knows anything about the accident or sees a damaged, white Porsche Panamera, please immediately call NOPD or CrimeStoppers at 504-822-1111. The reward for information that helps lead to an arrest and eventual indictment in this case now stands at $5,000.