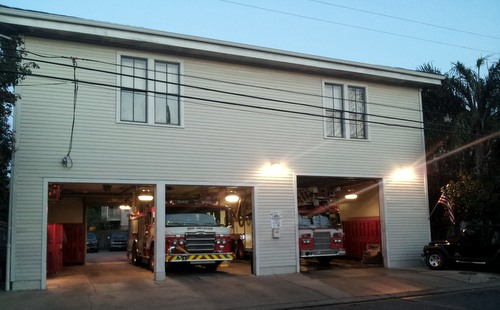 This weekend saw the departure of the New Orleans Fire Department Ladder Truck No. 5 from the Arabella Fire Station.   A final effort to save Ladder 5 came to naught when Mayor Landrieu’s office rejected an alternative plan proposed by affected Uptown residents.

The reason for the change was, of course, budgeting.  The city, facing a tight budget, lost $4 million in funding to the NOFD with the lapse of the three-year federal grant.  The NOFD wanted to keep all its pumper trucks, so two ladder trucks had to go.  Of the ladder trucks serving the Uptown area, Ladder 5 was the most expendable.

The problem is that Ladder 5 was not, in fact, expendable in the broader sense.  The city itself acknowledges that a huge swath of Uptown will now fall short of national standards for ladder truck response time.  This includes Children’s Hospital, which would really, really need a ladder truck immediately in the case of a major fire.  On the other hand, the NOFD is under a hiring freeze and has not been able to maintain national standards for sufficiently manning their current fleet of trucks.  The entire issue is something of a double-edged sword.

From the city’s perspective, it has more than doubled funding to the NOFD over the past five years.  Since 2007, the NOFD’s revenue from the city’s general fund has ballooned from $42 million to $85 million as post-Katrina federal monies dwindle.

However, like road repair and park maintenance, fire protection is an area where the city has simply gotten used to saving money.  In 2009, the Inspector General’s office issued a report comparing New Orleans’ funding in various areas to several comparable cities.  The study found that New Orleans was overfunding virtually everything, including the mayor’s office itself.  Only two areas were below average funding levels, and one was fire protection (although just barely).

What this means is that certain departments are getting too much money, but the NOFD isn’t one of them.  Allowing budgetary issues to compromise the NOFD’s ability to meet national standards is simply poor management.  The money is there, but instead of going to something fundamental like keeping our homes from burning, the money is spread throughout various bloated departments.

Don’t get me wrong, I understand that Landrieu’s ability to affect seismic change in our budget is probably minimal.  Overall, he has actually struggled to reform the budget.  Still, one wonders why he couldn’t have found some way to get the funding to save a single ladder truck.  It’s a continuation of the NOFD being the red-suspendered stepchild of the city’s budget.

In part, the NOFD is becoming a victim of its own success as there are fewer fires per year and the city becomes more complacent, but this is something we need to be wary of.  New Orleans is a veritable tinderbox of wood-frame Victorian homes chocked with old wiring.  It might not happen this year or the next, but if we continue to short-change the NOFD something bad will happen.  There’s going to be a major fire, a figure screaming in a window, and a ladder truck that doesn’t get there in time.

It certainly isn’t too late to save Ladder 5, but this is about more than one ladder truck.  It’s about whether we are really going to fund this department and keep it at national standards, or cross our fingers and hope for the best.  That’s gambling with peoples’ property and lives.  That’s the decision our city has decided to make.

[Correction: An earlier version of this article incorrectly stated that Mayor Landrieu did not meet with residents about the issue. In fact, Landrieu met with neighborhood leaders at his office Thursday, July 11, about the issue, a spokesman said.]