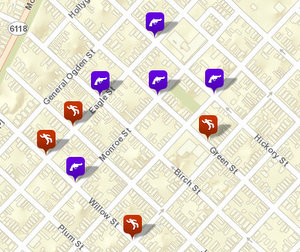 Homicides (in red) and gun cases (in blue) in the west Carrollton area in the last six months. (map via NOPD)

Although violent crime is down by 15 percent since last year in the New Orleans Police Department’s Uptown-based Second District, residents of west Carrollton say they remain concerned about the shootings and drug dealing they see and hear in their neighborhood.

About a dozen west-Carrollton residents were among the attendees of the Second District’s monthly meeting with community members Tuesday, and they outlined a number of concerns. They continue to hear gunfire from the streets outside their homes, they say, and see what appears to be drug dealing on certain street corners.

NOPD Second District Commander Paul Noel promised to put his narcotics investigators directly in touch with residents about the drug corners to get specific information about when the activity is taking place. Quality-of-life officer Wilfred Eddington promised to investigate locations that seem to be generating loud music and drawing crowds, and to help create a neighborhood-watch program in the area.

West Carrollton has seen four recent homicides, two in April (including the fatal shooting of an AmeriCorps volunteer) and two in June, within a fairly small area of about nine blocks, according to NOPD crime maps. (The maps show about 40 crimes classified as “assaults,” but they can run from threats to fights to nonfatal shootings.) It has also seen some of the heaviest policing — crime maps show about 30 drug cases investigated in west Carrollton in the last six months, rivaling the number in the Hollygrove area and significantly surpassing those in Gert Town, east Carrollton or other Second District neighborhoods.

With a new Second District station in the planning phases, west-Carrollton residents asked Noel if it could be located near them. One location under consideration is nearby at Pine and Earhart (another is near Freret and Napoleon), Noel said, but he cautioned that it would not solve much. Police officers, unlike firefighters, spend their time between calls patrolling the streets, not at the station, so the location of the station will have little effect on response times.

Creating new substations, meanwhile, would actually reduce the amount of manpower on the streets, Noel said, because they would have to be staffed.

“I’d love to give you a substation, but it’s not going to help you. It’s going to hurt you,” Noel said. “It’s going to take one more cop off the street.”