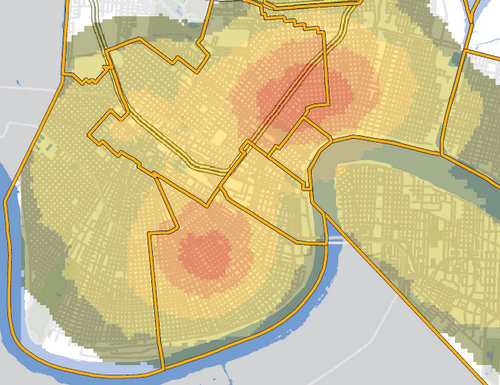 Mayor Mitch Landrieu has rejected an Uptown neighborhood association’s request that a ladder truck in Central City be removed from service rather than the truck on Arabella Street, saying that the squad in Central City responds to fires much more frequently. 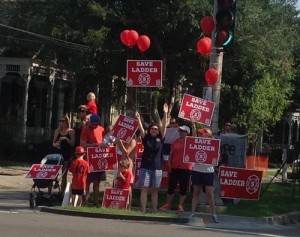 Neighbors around the Arabella fire station have protested the removal of the ladder truck (known as Ladder 5) there for months, because the change will leave an upriver swath of Uptown neighborhoods largely between Magazine Street and the Mississippi River outside the minimum standards for a ladder truck to arrive from the next closest stations, Ladder 7 at Claiborne and Carrollton or Ladder 8 at Martin Luther King. In a series of meetings, Superintendent Tim McConnell (then an assistant superintendent) replied that the Arabella station will still be staffed with a pumper truck — the most critical piece of equipment in a working fire — and that the removal of Ladder 5 was based on extensive data analysis.

In a letter to the Hurstville Neighborhood Association dated July 13, Landrieu directly addresses a request that Ladder 8 in Central City be taken out of service rather than Ladder 5.

“It is not in the best interest of the City and does not make sense from a fire-safety perspective to decommission Ladder 8 on Martin Luther King Boulevard,” Landrieu writes (click for entire letter). “This ladder receives a high volume of calls for service and responds to areas of the city with the most fires. In contrast, Ladder 5 has a comparatively low volume of calls and services few fires.”

From 2010 to 2012, for example, Ladder 8 responded to 170 structure fires, nearly twice as many as the 88 responded to by Ladder 5, according to data released by the mayor’s office.

The Ladder 5 supporters replied, however, that their plan keeps the entire Uptown area within the 8-minute national-standard response time for a ladder truck, and that the ladder on Martin Luther King is “redundant” because of a nearby station in the Central Business District. The removal of Ladder 5, they say, puts 4,508 addresses outside the 8-minute response time.

“It is unfortunate that the city has chosen to reject our proposed solution to paint the city map with ladder truck fire protection,” said Susan Krantz, “Even as New Orleans is named America’s fastest growing city in 2013, why does its leadership shrink city services, especially life-safety services?”

Officials with the city firefighters’ union have also criticized the cuts. Ladder 3 is also being removed from service and, with the removal of Ladder 5, the riverside edge of Uptown will join several other parts of the city outside that 8-minute response time, including Lakeview, much of the Gentilly lakefront, parts of New Orleans East and parts of Algiers.

Calls for service to the city’s ladder trucks in 2012. “Starts w/ 1” refers to any call reported as a fire; “111/111A” refers to occupied and unoccupied structures respectively. “Ladder 6 and Ladder 4 are geographically isolated on the West Bank and the Upper Ninth Ward, respectively,” the city notes. (via City of New Orleans) 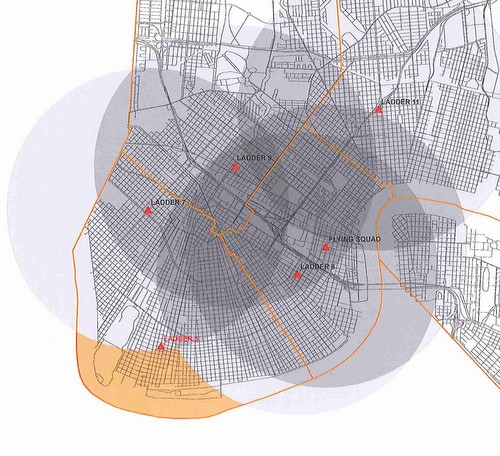 Each circle represents the 8-minute response time of the remaining ladder trucks after the decommissioning of Ladder 5. The orange-shaded area represents the area of Uptown left outside that national standard. (map via Save Ladder 5 proponents) 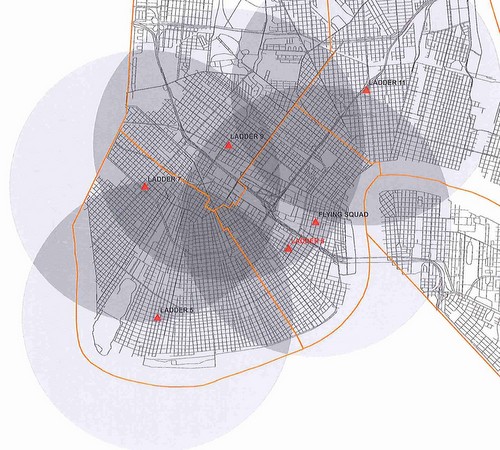 An alternate plan that would retain Ladder 5 and cut Ladder 8, restoring coverage within 8-minutes to the riverside areas of Uptown but reducing the density of coverage in the central area of the city. (via Save Ladder 5 proponents)