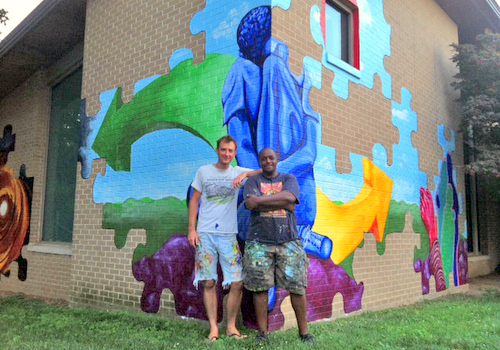 Andy Dahl (left) and his employer at Mural Masters, Shawn James, stand in front of one of the many murals composed over 2013 on the campus of Nexus Treatment Sites in Baltimore, Maryland. (photo by Jean-Paul Villere for UptownMessenger.com)

“Sometimes when I’m in the studio streaming ‘OZ, I hear the live wire music line-up for the evening, and I want to hop on my bike and take a ride into the Quarter and see what’s goin’ on,” says Andy Dahl.  “I really miss New Orleans, but I’m really enjoying what I’m doing here too so – – -,” he adds.  Woven into the fabric of most metropolitan areas are the working class – and often starving – artists.  New Orleans possesses its fair share, and in the course of the last year or so, one such soul transplanted to Baltimore.  On a recent road trip up east I briefly caught up with Andy and peered into what he’s been up to since having left (hopefully temporarily) the Crescent City.

Meeting Andy years ago through the gallery scene in New Orleans, I knew his work to be big, bold, and transformative.  Most of his scenes were personal and figurative, often pieced together with many canvasses, and each composition had a different story.  At that point in time to see his work installed was refreshing and inviting, so to view firsthand his growth to mural scale — a time zone away under the hands-on tutelage of Shawn James, the owner / operator of Mural Masters — the progression comes off as a completely natural part of his journey as an artist.  Andy came to Baltimore to attend grad school.  A year in, he began volunteering both at the city’s creative arts center as well as repurposing bicycles.  And then the mural gig came up.  And unlike school and his volunteerism, he actually gets paid to make art.  “Not a lot, but enough,” he says.  “And between all of it, I never have a day off,” he laughs.

On the evening I visit Andy on the campus for Nexus Treatment Sites where the murals he and Shawn composed are coming to completion, the city’s temperature sets a record in the heat index at 106.  Exterior mural work and overly warm summer days make for less than ideal bedfellows, but having endured a few New Orleans summers, the extremes do not seem to phase Andy.  He works prepared to hydrate with the same cooler set up I remember seeing him walk around Uptown with, a tiki-esque maybe gallon hand jug of a contraption.  He offers me a swig, I indulge and thank him, and we walk the campus.  The murals vary by building but all tie together.  He and Shawn work collaboratively, and the campus, once only a muted brown bricked overlay of various facilities now pops with swoop and color.  It breathes a welcome sigh into the lives of those seeking a balance.  And once they finish the outside, the plans call for interior work to follow.

As I leave Andy and Shawn we talk about where Andy may land next upon completion of grad school.  Maybe he’ll stay in Baltimore, maybe he’ll seek another city to explore, or maybe, just maybe, New Orleans will resurface on his radar.  I of course push for the latter, even supposing some event could be created in spring of 2014 to bring him back however briefly, like a 24 hour mural-thon or something.  Hmmm, could be…