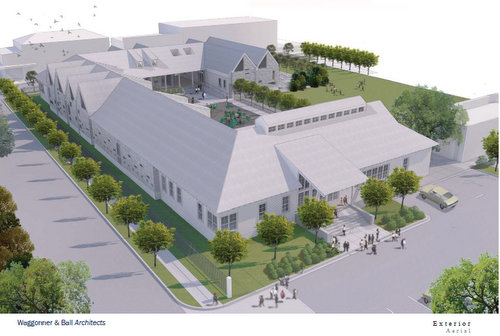 “I think it’s safe to say he’s a preservationist at heart,” Smith said of Ball — one of the reasons he was selected for the job.

Since a meeting last November to discuss expansion plans, Smith said the school hired an architect and met with many neighborhood group leaders as well.

About 15 people gathered in an auditorium to view site plans and renderings from Waggonner and Ball Architects.

Construction on the 18,000-square-foot complex would ideally begin in June of 2014 and finish in August of 2015, Ball said. Construction will not affect classes, Smith said.

“We want to make a complex that’s residential in character,” Ball said, as he paged through slides that drew the outline of the homes on Soniat Street and flipped them to reveal a similar facade for the new facility.

The space would hold up about 150 children, more than twice the 60 early childhood students Newman currently enrolls. It would serve infants to four-year-old children.

The facility will contain 10 classrooms, administrative offices and a nursery. Outside there would be green space, a breezeway and a small playground for the younger children.

The plans also include an upgrade to the athletic field amenities — a concession stand and new bathrooms, which would have a patio on top of them that abutted the last row of the existing bleachers. There would be standing room for people to watch games on the football field.

The design contains a parking lot with 66 spaces, increasing the number of parking spots on campus. That parking lot would also allow parents to drive enter an on-campus loop to drop off children, removing some of the carpool clog from public streets.

“Personally, I think they’ve done their due diligence,” said Louise Schafer, a neighbor. She said she was happy they had taken neighbors and traffic under consideration.

Schafer’s husband on the other hand, said he was concerned with parking and hoped the school would expand parking spaces. The Schafers said they have lived in the neighborhood for more than 30 years.

Smith did not say after the meeting how much the project is expected to cost.

The plans also outline a possible future athletic pavilion, something Ball said was mapped out to be clear for city planners.

The plans will go before the City Planning Commission on Aug. 13 because the building requires a conditional use approval. School leaders anticipate a recommendation for approval by planning commission staff. 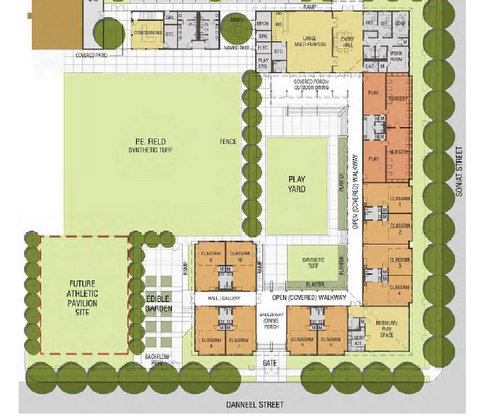 Part of the site plan for the new preschool facility on the Isidore Newman School campus.