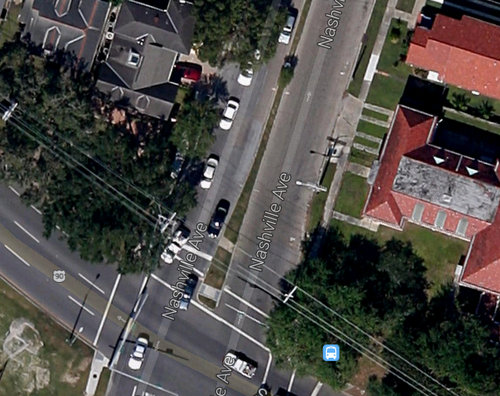 After a repaving project this fall, Nashville Avenue will trade the four driving lanes it currently has on the lake side of South Claiborne for two vehicle lanes and two dedicated bicycle lanes, officials said Tuesday. 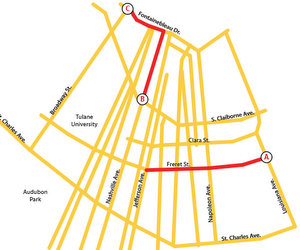 Map of upcoming repaving projects on Freret, Nashville and Fontainebleau. (via pavinglaroads.com)

Nashville from South Claiborne to Fontainebleau, Freret from Louisiana to Jefferson and Fontainebleau from Broadway to Nashville are all bundled together as a single repaving project that will begin in August, as soon as a similar repaving project on Broadway ends. The $3.3-million project is funded in part by the Federal Highway Administration, and is expected to be finished in November, said officials with the Paths to Progress program in an informational session about the project Tuesday evening.

For the most part, the project is simple in scope — repair broken sections of street, install handicap-accessible ramps on the sidewalks, scrape off the top two inches of asphalt and replace it with two inches of new blacktop — and drivers will see little change except smoother roads. On the Nashville Avenue segment, however, the city Department of Public Works has requested that the road be repainted with two bike lanes and two traffic lanes, to replace the four driving lanes it has now, said project manager Rick Hathaway.

The bike lanes will actually stop and start a few hundred feet from South Claiborne, Hathaway noted in response to one question, to allow traffic on Nashville and Claiborne room to interact safely. Another Nashville resident worried that drivers may try to use the bike lanes as a high-speed passing lane, but Hathaway reminded her that it is illegal to drive in a bike lane.

About 30 people attended Tuesday night’s meeting — roughly evenly distributed among the three road segments in the project — and the handful that spoke about the bike lanes had mixed reactions. Some worried that the drop to two driving lanes will slow traffic or divert it onto side streets, into the neighborhood. Others enthusiastically applauded the change, saying it will make Nashville safer for everyone — drivers, bicyclists and residents.

The meeting also drew a contingent of Freret business owners concerned because the city’s streetscape project to repair curbs on the business corridor that began last year is still unfinished. While the city returns to work there, the Paths to Progress repaving will probably start work at the opposite end of the corridor, by Louisiana Avenue, Hathaway said. The repaving will not go into the Napoleon Avenue right of way, he noted, so it will not interfere with the installation of drainage canals there.

One resident questioned the timing of all the projects together — Fontainebleau is in dire need of it, he said, but Nashville and Freret are in decent shape: Why not wait until fewer major projects are going on for Freret and Nashville? Or why not focus on the side streets, which are often in far worse shape?

Because the Paths to Progress program is federally funded, there is a timeline attached to spending the money, Hathaway said, and the drainage canal installations on Napoleon and Jefferson will take several more years to complete. Meanwhile, Hathaway said, the city has its own upcoming “Recovery Roads” program to repave some of the broken side streets.