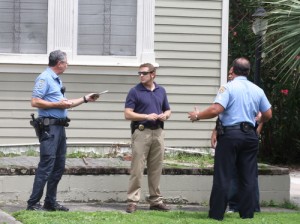 Detectives interview Tulane linebacker Trent Mackey (seen behind the investigator on the right) at the scene of a July 12 home invasion on Broadway. (UptownMessenger.com file photo by Robert Morris)

One year ago, Megan Wales was still a 20-year-old Tulane student and a friend and co-worker of Tulane football standout Trent Mackey when a drug deal between them was interrupted by two intruders who burst into her apartment, pinned her to the kitchen floor with a gun to her head and dramatically altered the course of all their lives.

Police have since charged Mackey in the robbery as well, and prosecutors this week are describing him as a co-conspirator to the gunmen, an accomplice in touch with them minutes before who conveniently left Wales’ apartment door open allowing the men to rush in. Mackey’s defense lawyers, however, say the Tulane football star is the victim of an inadequate investigation focused solely on bagging a high-profile conviction, and that Wales was just as complicit in the events of the day and web of lies afterward as Mackey was.

Assistant District Attorney Lindsay Truhe kicked off the testimony Wednesday by calling Wales to the stand. She was a cocktail waitress, the soon to be 22-year-old recounted; Mackey was a bouncer, the one who would escort her to her car after closing the bar they both worked at.

On July 12, a little after 1 p.m., the two college students were going to meet at Wales’ apartment on the 600 block of Broadway Street to exchange some marijuana, Wales said, their third attempt at the deal after the first two hookups fell through in prior days.

Mackey arrived at her place after a City Council meeting about the proposed Tulane football stadium ended, and the two were catching up in Wales’ living room when Mackey received a phone call. She said the linebacker answered, “Hey, coach,” and proceeded out of the apartment to talk.

After he returned, Wales said she got up to lock the apartment door, but just as she reached it, two men rushed in.

“Immediately these two guys busted in and put a gun to my head,” Wales said.

She said she was ordered to the ground, and that they took her laptop, cell phone, purse and the marijuana she intended to sell to Mackey. She also said they addressed Mackey by his first name, “Trent.”

When they ran from the apartment she said she chased them and she eventually recovered her phone and laptop directly from the robbers. Then she said she drove around the neighborhood attempting to spot them again.

Truhe entered a series of text messages between Wales and Mackey into evidence and asked Wales to review them and read some aloud. In one message, Mackey wrote, “we could stake the crib out and catch her walking in” — a phrase the defense would chalk up to a fraternity prank.

Wales initially did not tell police about the stolen marijuana, she admitted on the stand, because she feared the case would be overlooked as a drug deal.

During cross-examination, attorney George Kelly painted a different picture for jurors, proposing Wales’ laptop had not been stolen at all and that she was trying to hide drug paraphernalia in her apartment, not riding around the block looking for robbers, while she called 911. Wales denied that any part of her initial account was untrue — except for the omission of the marijuana sale.

“I guess I was a middleman, or middle-woman of sorts,” Wales said to Kelly at one point. “I’m not a drug dealer.”

The state’s final witness was Guy Swalm, an eight-year NOPD veteran and current Second District police detective. The state asked Swalm to help identify telephone calls and reviewed his investigation, but the defense focused on details such as the apparent lack of crime scene photos.

District Attorney Leon Cannizzaro made a brief appearance in the courtroom audience, listening to testimony for a short period of time.

Mackey is been charged with criminal conspiracy to armed robbery and armed robbery with a firearm. The trial will continue Thursday.

Editor’s note: This article was reported by Marta Jewson of Mid-City Messenger because Uptown Messenger reporter Robert Morris was initially subpoenaed as a witness in the trial. Morris had interviewed Wales the day of the crime about the sequence of events that unfolded as well as her high opinion of Mackey at the time.

On behalf of Uptown Messenger, New Orleans-based First Amendment attorney Scott Sternberg invoked the Louisiana reporter’s shield law to protest the subpoena, saying that Morris would not take the witness stand unless under a direct court order. The law prevents a journalist from having to testify about any information “which was not published or broadcast” unless the information is critical to a legal argument and it can’t be obtained anywhere else. It is intended to protect the ability of the media to gather news of public interest without threat of having to testify about it later to the benefit of one side or another, thus harming the reporter’s credibility as a neutral observer.

During cross-examination, defense attorney Rick Kohnke asked Wales if she remembered making the statements reported by Uptown Messenger. After Wales said she did recall making the quotes as they were reported, District Judge Keva Landrum-Johnson ordered Morris released from the subpoena without having to testify, and Kohnke agreed without objection.