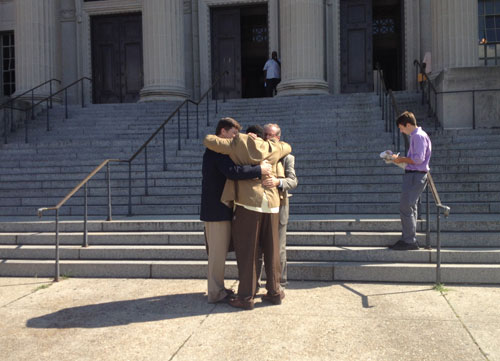 One year to the day that former Tulane linebacker Trent Mackey was involved in a drug deal turned armed robbery, the 23-year-old was found not guilty on the two armed robbery charges brought against him.

On trial for criminal conspiracy to armed robbery and armed robbery with a firearm, the 12-person jury unanimously ruled he was not guilty on both counts.

There was no question as to whether Mackey was at the scene of the armed robbery. He had planned to meet Megan Wales, a fellow Tulane student, at her apartment on 600 Broadway Street that day to buy marijuana from her.

The question was whether he helped orchestrate the event, which became much more than a simple drug deal when two men burst into the apartment and one pinned Wales on her apartment floor with a gun to her head.

There were many contradictions and inconsistencies throughout the four-day trial, two of which contained witness testimony.

Defense lawyers argued Mackey was a victim of the state who wanted to bag him in a high-profile case.

The state leaned on phone records placing Mackey in communication with other men charged in the crime and Wales served as their star witness.

Wales served as the first witness for the state. She said Mackey received a phone call when they were in the apartment together and stepped outside the apartment to take it. When he returned, she said he did not lock the door.

Just as she went to lock the door she said two men burst into the apartment and the one with a handgun told her to drop to the floor and placed the gun to her head.

The men took her laptop, phone, purse and the marijuana Wales testified. She also admitted in initial interviews she omitted the marijuana because she said she did not want the case to be overlooked.

She said she chased the robbers who returned both her laptop and phone when she caught them. She said she then called 911.

She later served as the final witness for the defense. And Mackey’s attorney, Rick Kelly, pegged her on many inconsistencies in her testimony.

In between her testimony phone records were introduced that indicated she had actually called Mackey three times before calling 911. An initial police report from Wales also stated the chain on the door had been locked.

Kelly told the jury the state’s presentation of phone records was not enough to prove Mackey’s intent or knowledge of the robbery.

“We all know how many texts can go back and forth between two people trying to do a dope deal,” said Kelly during closing arguments.

He acknowledged that no one was trying to hide the fact that drugs were involved.

“It was a reprehensible investigation and not the basis to send someone to prison,” he said.

The state offered its rebuttal, arguing it was clear Mackey had conspired with the other men before the crime.

“He conspired to do it and he ultimately did it,” said Assistant District Attorney Lindsay Trule.

“He doesn’t get a pass because he plays football.”

About two hours into deliberations jurors requested some of Mackey’s phone records. They whispered in their seats in open court while huddling over a detailed printout of the records.

The jurors left the court room to continue deliberating and a short time later they returned with their verdict.

As Criminal District Court Judge Keva Landrum-Johnson read “not guilty” aloud there were small outbursts in the audience—Mackey’s family members tearing up.

“The emotions are just overwhelming,” said Trent Mackey Sr. outside the courthouse. “I don’t feel good about the situation but I’m just glad my son is ok.”

Kelly said the defense was “extremely gratified” with the result.

“It became clear early on that this young man was being railroaded by an agenda and there was nothing we could do about it until we got in front of a jury,” Kelly said.

Kelly said he overheard a juror tell Mackey to do positive things with his life as the juror passed Mackey on his way out.

“There is no question that that is what you can expect from Mr. Mackey,” said Kelly.