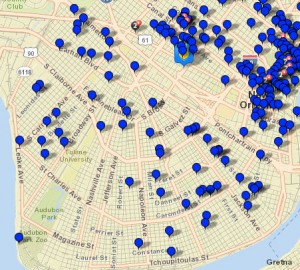 All reported robberies around Uptown New Orleans in 2013. (map via NOPD)

The procession of high-profile Uptown robberies may seem unabated lately: a Garden District couple held up on their front porch, masked men barging into Cooter Brown’s in search of the safe, or a trio of very young teens in skeleton masks demanding money at gunpoint on Broadway Street, all just in June alone.

But despite the perception these incidents create, and in spite of a generally shrinking New Orleans Police Department, Uptown has seen a dramatic decrease of 50 percent or more in the number of armed robberies reported in 2013 from the same period of time last year, according to statistics compiled from NOPD sources.

“It’s a meaningful reduction,” said Professor George Capowich, a criminologist at Loyola University New Orleans. “If it drops from 100 to 45, there’s no doubt that’s statistically significant.”

Focus on ‘hot spots’
NOPD Superintendent Ronal Serpas, speaking at the department-wide Comstat meeting on Friday, attributed the general reduction in violent crime to use of data-driven deployment of patrol vehicles. A NOPD computer system analyzes the frequency of all crime — from the traditional focus areas of rape, robbery and murder down to more trivial incidents such as theft and car crashes — and creates a map of “hot spots” in the district, often as specific as an individual intersection or stretch of a few blocks.

A dedicated officer is then sent to those hot spots, and in theory, his or her presence either convinces potential troublemakers to go elsewhere, or results in an arrest that takes a criminal off the street. Even if that hot spot is nowhere near the site of the nearest robbery — one frequent spot in the Sixth District, for example, is the intersection of Martin Luther King Boulevard and South Claiborne, because of the high number of car crashes, though it is rarely the site of robberies — the pressure on criminals there is intended to reduce the overall amount of crime.

Capowich, the Loyola professor, has been consulting with the NOPD on its implementation of the data-driven policing, and said their approach to these patrols is based on the best research available.

“Random patrol is not very effective all by itself,” Capowich said. “Because crime isn’t random, patrolling randomly — you wouldn’t expect it to be all that effective. … What a directed strategy like that does is it increases uncertainty for the offenders. It looks like, ‘There’s too great a chance I might get caught,’ so they might leave the area.”

Serpas on Friday noted the reduction in violent crime despite a force that’s 20 percent smaller than it was just two or three years ago, and said the only way to explain it is through more effective police deployment. With new recruits now in the academy, more officers should soon be headed onto the street, Serpas said, increasing the manpower available to be dedicated to those directed patrols.

Solving robberies
District commanders — Paul Noel in the Second, and Bob Bardy in the Sixth — offer two additional, somewhat related explanations. In 2012, both districts suffered from several robbery sprees allegedly committed by one person or a small group, such as a “clique” of robbers in the Irish Channel targeting taxi drivers or a rash of robberies in the university area last summer. Such a spree – a handful of robberies in a few days’ time — can push robbery statistics quickly through the roof.

As the year progressed, however, some of those perpetrators were arrested, taking them off the Uptown streets — such as the gang allegedly involved in the carjacking on Camp Street that left attorney Sandy Kaynor severely injured, or the suspect in the Dat Dog robbery. And this year in general has seen a strong pattern of arrests as Noel has made reducing armed robberies the top priority for the district. In the Second District, for example, detectives currently have a 43-percent clearance rate, Noel said — well above the national average of about 25 percent for cities of similar size.

“We really don’t believe that’s an accident,” Noel told the NOPD leadership at a recent departmental Comstat meeting, praising the Second District detectives. “They solve these cases. We’re capturing these guys and getting them off the streets.”

The Sixth District has seen a robbery-clearance rate closer in line with national averages, but its overall violent crime numbers have also plummeted — down 40 percent for the year. Bardy has attributed that to a string of major indictments against alleged Sixth District area gangs — the 110er’s in the Irish Channel area, the Allen family in the central part of the district, and the 3NG group in the Hoffman Triangle area — that led to dozens of arrests.

“The last three Fridays in a row, we’ve had some surprises for you,” Bardy said to Sixth District residents at June’s community meeting with them, shortly after the most recent indictments. “I’m really happy with it. This is a long-term, not a Band-Aid, fix.”

Crime in context
The level of violence in New Orleans can be difficult to succinctly describe. The city has long held the highest rate of murders per capita in the country (though 2013 numbers show a sharp reduction as well), the statistic that criminologists rely on most because of its lack of subjectivity. Most times, the presence of a dead body makes the crime indisputable, tough to hide behind fuzzy classifications or inaccurate crime reports.

But New Orleans officials often counter that the murder problem is relatively contained to a small subset of society, those already involved in criminal enterprises, and doesn’t reflect life for most people in the city. Robberies, police officials say, may be a better indicator.

“Armed robberies are a way we measure violence in society,” Bardy said at the June community meeting. Robberies are most often committed against strangers, unlike murders, which are typically committed among acquaintances. “It’s a measure of aggression in society.”

Overall violent crime rates in New Orleans are far lower than the murder rates, and robbery rates bear that out in comparison to other cities. The Crescent City saw about 3 robberies per 1,000 people in 2012, according to the FBI database. That’s about middle of the pack for similar-sized cities in the region — Atlanta and Memphis saw robbery rates of more than 5 per 1,000 people; Birmingham, Baton Rouge and Jackson, Miss., all recorded rates around 4.5 robberies per 1,000 people; Nashville’s rate was similar to New Orleans, at 2.8; Mobile was 1.8 and Austin was 1.2.

So if New Orleans’ robbery rates are not especially high to begin with, and they may actually be falling, should New Orleanians start feeling safer? Perhaps, said Capowich — until the next shocking robbery, or until the victim is someone you know.

“People’s perceptions and their fear of crime are affected by a lot of things. Certainly one of them is, ‘What’s the crime rate?’ So if that continues, it would have an effect,” Capowich said. “But even if it continues, and suddenly there’s a rash of high-profile incidents, that improved perception is easily erased.” 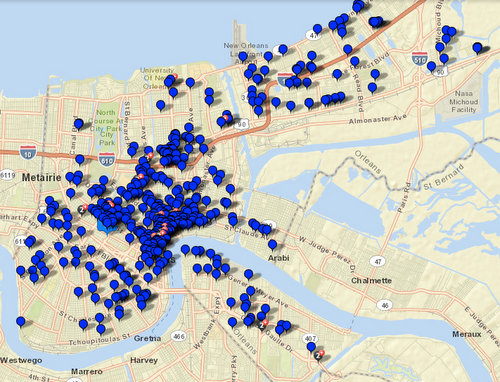 A citywide map of robberies in 2013 shows a greater concentration in Mid-City and downtown than in the Uptown area. (map via NOPD)

5 thoughts on “Despite shrinking NOPD manpower, number of Uptown robberies drops by half”