The building that housed Pippen Lane (photographed in March 2011 by Google Maps) is slated for redevelopment as a two-story location of national retailer West Elm. 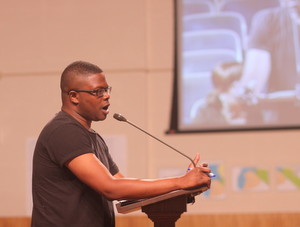 Cornelius Payne proposes a coffee shop for the 800 block of Jackson Avenue before the City Planning Commission on Tuesday. (Robert Morris, UptownMessenger.com)

Two redevelopments on major thoroughfares around the Garden District — an upscale national furniture retailer on Magazine, and a new location of a local coffee shop on Jackson Avenue — both won initial approval Tuesday from the City Planning Commission.

The West Elm furniture store is proposed to replace the Pippen Lane boutique at the corner of Magazine and Seventh streets, and will require adding a second story. Developer Craig Ripley said the upstairs space will be used only for storage, and that the actual retail area will actually be smaller than when the building was previously the Charbonnet & Charbonnet furniture store.

“The second floor will be only storage, never retail, and we contend in many ways there will be less impact on parking,” Ripley said.

City planners, however, disagreed. Because of the waivers the building has already received, they said the addition will require 12 additional off-street parking spaces to comply with city regulations, and recommended West Elm be allowed to find them within 600 feet of the store.

About a half dozen neighbors, many from the block of Camp behind the store, and members of the Garden District Association begged the commission for help with traffic and parking. They have no objection to the store itself, but described having to walk several blocks from their car to their homes every time they even go get groceries. Making the narrow street next to the store one-way would help, many said, but they are also concerned about delivery trucks.

One neighbor, however, argued the opposite. James Ryan of Seventh Street said finding space for parking within 600 feet would likely be impossible without tearing down a historic home. Meanwhile, the furniture store will bring the least amount of traffic of any business around, and is the only one that offers parking, Ryan said. And Ripley agreed that the real problem is all the smaller businesses and restaurants that are not required to provide any parking.

Commissioner Robert Steeg proffered a compromise: allow West Elm to keep the current parking configuration without adding more spaces, but write a new requirement that holds Ripley to his promise of not exceeding 6,000 square feet of retail space. After negotiating the details, Commissioner Nolan Marshall III proposed moving forward with the compromise and it was adopted unanimously.

The next presentation was Cornelius Payne’s proposal to open a coffee shop in the first floor of the building at 839 Jackson Avenue. That area will also feature conference space for use by ReNEW Schools staff from across the street, and the upstairs will remain two residential apartments. Payne’s own home is next door.

With enthusiastic endorsement by the Coliseum Square Association, the Irish Channel Association and ReNEW Schools, Payne’s proposal was quickly approved by the City Planning Commisison. After the meeting, Payne said he couldn’t yet disclose who would operate the coffee shop, but said he is currently negotiating with “somebody local.” He hopes to begin interior renovations in October and be finished in December, and open for business in January, he said.

The City Planning Commission’s recommendations will next be forwarded to the City Council for final approval.