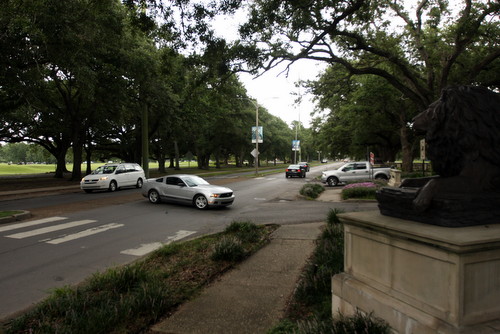 Under the watchful eyes of the lions guarding Audubon Park, cars make the turn off Magazine Street around faded crosswalks. (Robert Morris, UptownMessenger.com) 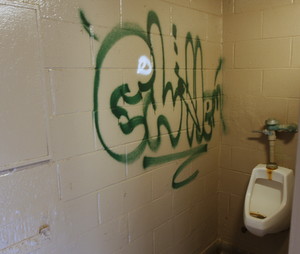 Graffiti in the men’s restroom in the Riverview area behind Audubon Park. (Robert Morris, UptownMessenger.com)

As The Fly continues to increase in popularity as a riverfront recreation spot and the uppermost end of Magazine Street continues to suffer under heavy traffic, the Audubon Commission is asking city officials for $8.7 million in long-overdue upgrades to both.

Sprucing up The Fly

The Riverview area behind Audubon Park (commonly called The Fly) seems to be increasing in popularity with the lakefront inaccessible, said Larry Rivarde, managing director of Audubon Zoo and Park, during a recent hearing on the commission’s 2014 budget requests. The sports fields are used by the Carrollton Boosters and Children’s Hospital, while the lawn is used for church picnics, crawfish boils and family reunions.

“College kids are flocking to it like crazy,” Rivarde said.

Specifically, projects Rivarde is proposing for The Fly break down to about $3.6 million:

The project would also include the creation of a dedicated walking and biking path, Rivarde said. 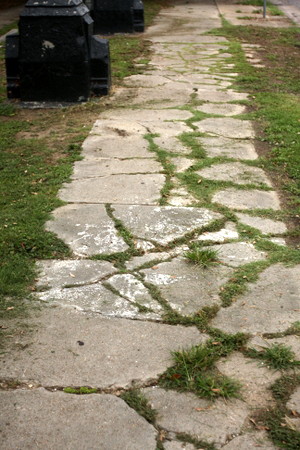 The sidewalk along Magazine is heavily cracked and the curbs have been obliterated because of people parking on them during busy days, Audubon officials say. (Robert Morris, UptownMessenger.com)

Meanwhile, traffic on Magazine Street in front of the zoo is only increasing as well. Because Tchoupitoulas ends just before the park, Magazine almost serves as an extension of it for many drivers who are headed further into Carrollton or beyond, and the street is showing the wear.

Steve Dorand, an Audubon Nature Institute vice president, suggested a series of improvements to help with both traffic flow and safety. On one hand, the zoo intersections should be redesigned to decrease bottlenecks, such as with a left-turn lane for Uptown-bound drivers before the entrances.

“The pressure on this street is pretty tremendous,” Dorand said. “If you could make turning lanes, you’d get rid of pressure and the back up.”

On the other hand, the landscaping and design along the street should make it clear to drivers that the end of Magazine is part of a major city park, ultimately calming traffic. Crosswalks should be dramatically upgraded with brick pavers, to give them a more prominent feel and command more attention from drivers as pedestrians and bicyclists cross from the park into the zoo.

“We really feel like we need something like, ‘You’re entering Audubon Park,'” Dorand said. “To us, it’s everything. It’s the main road, the portal to everything in the park.”

Jack Davis, a resident near the park who attended the hearing, praised the improvements being proposed. The crosswalks in particular would help with major safety issues on Magazine Street every day, he said.

“The thing that scares me more than anything is seeing mothers with strollers crossing Magazine,” Davis said.

The major components of the $5.1 million being requested along Magazine Street include the brick crosswalks, bricks for the sidewalks and street paving. Landscaping along Magazine will be improved with more oak trees, irrigation will be added, and the trees will be lit. Street lights will be replaced with those poles more appropriate to the historic nature of the area.

Finding funding
The Audubon requests will ultimately be weighed with other items being sought around the city and included in a new Capital Projects ordinance. There is some unallocated money for parks around the city that might be available for the projects, said Geoffrey Moen, a planner with the City Planning Commission, but he also suggested to Audubon officials that they work to reduce their costs through a variety of means.

The commission still has $400,000 from a 2004 citywide bond issue, and that can help with part of the project. Magazine Street is slated for repaving next year, and much of Audubon Commission’s work could be coordinated with that project. And, Audubon might be able to find community sponsors for some of the higher-profile elements of the improvements to The Fly, such as the new walking and biking trail, Moen suggested.

After the meeting, Rivarde said the commission will look at all those options, but they remain hopeful that the city budget will cover the remainder of the project.

“It’s a great plan,” Rivarde said. “We just hope we can get the funding.” 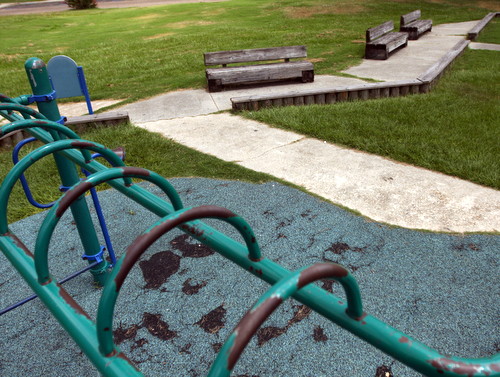 The deteriorating surface under the playground equipment and old wooden benches along the sidewalk are all overdue for replacement, Audubon officials say. (Robert Morris, UptownMessenger.com)

17 thoughts on “Audubon Commission seeking $8.7M for upgrades to The Fly and Magazine Street”